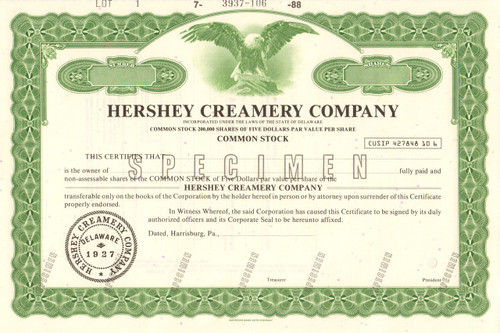 Hershey Creamery Company, also known as Hershey's Ice Cream, is a creamery that produces Hershey's brand ice cream, sorbet, sherbet, and frozen yogurt, and other frozen treats such as smoothies and frozen slab style ice cream mixers. Founded by Jacob Hershey and four of his brothers in 1894 (all of whom have no close relation to Milton S. Hershey and the chocolate company that he founded, also in 1894, although they were 3rd cousins once removed), it was taken over by the Holder family in the 1920s. The company was one of the first to offer consumers pre-packaged ice cream pints. In 1998, it modernized its operations to increase efficiency and reduce overhead. With their shared names and cities of origin, Hershey Creamery and Hershey Company have had a tumultuous relationship marked by multiple lawsuits over trademark issues. In the mid-1990s, the companies settled their most recent legal battles out of court, with the creamery agreeing to add a disclaimer to its ice cream products to note that it is not affiliated with The Hershey Company.

The family-owned business has approximately 450 employees and operates 30 distribution centers in 28 states across the Eastern and Northeastern United States. It is a publicly traded company, with its stocks listed only on Pink Sheets as the company offers a limited number of shares to potential shareholders.

he Hershey brothers, Jacob, Isaac, John, Paris, and Eli, founded Hershey Creamery Company in 1894, with the company originally operating out of the Hershey family's Lancaster County farmhouse. The ice cream was packed in metal-lined wooden containers that the Hershey brothers designed and built. The containers were loaded into trucks with ice packed around them to keep the ice cream fresh and cold. Salesmen traveled daily routes to deliver product to customers in the county and in surrounding areas.

In the 1920s, the company was merged with the Holder family's Bethlehem-based Meyer Dairy Company, retaining the Hershey name. In 1926, with demand for the ice cream exceeding the capacity of the farmhouse, the newly merged company constructed its first ice cream plant in Harrisburg, Pennsylvania. During the Great Depression, the company became the first ice cream maker to offer its products in pre-packaged pints. It began creating new flavors of ice cream which it then sold to other ice cream makers. Following World War II, the company continued to answer the call for greater convenience in consumer foods and expanded its offerings to include single-serve, easy to eat items such as ice pops and ice cream sandwiches. In the 1960s, the Holder family assumed full ownership of the company.

As the company grew, it split its production operations, with the Harrisburg location mixing the ice cream and a new facility in Lower Swatara Township used for the actual hardening and packaging of the product. While local orders continued to be delivered in small Hershey's Ice Cream refrigerated trucks, the company shifted to transporting most of its ice cream to refrigerated tractor trailer trucks, enabling it to stretch its market beyond the state of Pennsylvania.

It expanded its distribution facilities, eventually occupying 22 co-owned distribution centers. This enabled the company to ship products out more quickly after orders are received and resulted in less travel time for the products, ensuring freshness and quality were maintained. In the summer months, the company greatly increased its workforce and leased additional cold-storage space to help meet the seasonal orders, as the orders were prepared by hand. In 1998, operations were modernized and automated when the company purchased 105 acres in nearby Middletown where it constructed a modern 1.3 million cubic foot warehouse, enabling it to boost its efficiency, reducing the need to increase its summer workforce, and reducing the frequent product loss caused by hand orders and inefficient packing systems. The modernization of its warehouse also improved inventory management, order accuracy, and has helped the company continue its growth.