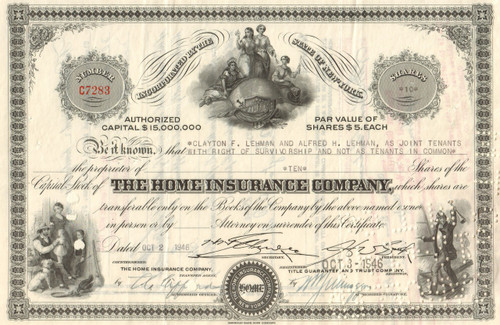 Interesting insurance piece. Nice triple vignette on this older style cert.  Various classical female figures flank the US shield in the top vignette.  Early home scene at the bottom left and a fireman at the bottom right. Perforations as shown in pictures.  Issued and cancelled. Dated 1946

The Home Insurance Company was the 23rd-largest property and casualty company in the United States. Home provided virtually all lines of insurance, with the bulk of its business being industrial property insurance and liability for large accounts. The company had undergone numerous changes over the course of its history, and contributed significantly to the face of modern property and casualty insurance.

When Home was founded in 1853 insurance was very different from what it is today. Property owners purchased insurance to hedge the risk of loss. Claims were not expected to cover more than the value of the lost property, and sometimes covered less. Only a few types of insurance were available, and insurance companies were generally limited in the types of coverage they could offer. Indeed, many merchants had trouble getting enough protection for their property. To help solve this problem, a group of New York City merchants established The Home Insurance Company.