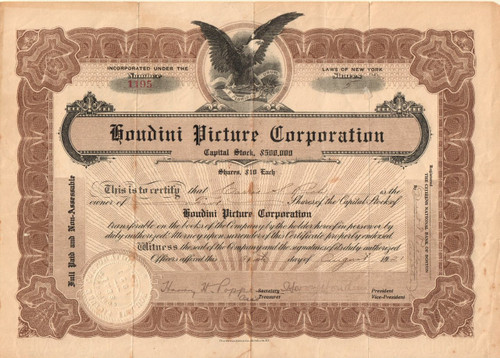 Very rare piece of entertainment and financial history.  This is a real stock certificate signed by Harry Houdini as company president and Harry Poppe as treasurer.  Offered below market value and previous sales. As presented, this is certificate 1195 for 5 shares and issued to Carrie Rich, dated 31 August 1921.  The certificate measures 11.5" wide and 8.25 inches tall, including borders. Light conservatory tape repairs on the back to prevent further splitting of seams. Minor foxing at the previous folds and edges as shown. Stored and shipped in a Mylar conservatory sleeve.

Chartered by the State of New York on February 26, 1921, the Houdini Picture Corporation was involved in three Houdini silents: “The Soul of Bronze” (1921), “The Man from Beyond” (1922), and “Haldane of the Secret Service” (1923). Houdini’s company distributed the first two films; Houdini starred in the last two.

Houdini's introduction to motion pictures was a natural progression following his 25 years on the vaudeville stage as the world's greatest magician. In January of 1919, Houdini starred in his first motion picture, The Master of Mystery, working for a weekly salary of $1,500 plus half the profits. The Master of Mystery was distributed worldwide and successfully portrayed Houdini's illusions and stunts, earning him fans from as far away as Asia, South America and Australia. The Grim Game followed in which Houdini defied death dozens of times. Other films included Terror Island, The Man From Beyond and Haldane of the Secret Service.

The focus of each of Houdini's films was his ability to escape from any situation. The death-defying illusions he performed on the screen served to keep his live performance career in demand. When Houdini's acting ability was met by critics with mixed reviews, he ultimately returned to the stage. Houdini's movies stayed in the family for some years following his death on October 31, 1926. While in the basement of a brother-in-law's home, the films were discovered by an inspector who ordered the cartons of films be removed immediately as they were combustible. Sadly, the films were hauled off as rubbish.

Harry Houdini
Harry Houdini was born on March 24, 1874 in Budpest, Hungary, with the name of Ehrich Weisz. He was one of six children and the son of Rabbi Mayer Weisz and his second wife, Cecilia Steiner. In 1876, Mayer Weisz immigrated to the United States where he found work as a rabbi and changed his last name to Weiss. In 1876, the remainder of the family joined him in the United States.

The family moved to Milwaukee when Ehrich was eight years old. During his early years, Ehrich sold newspapers and shined shoes to help support the family. On October 28, 1883, nine year old Ehrich made his first appearance on stage, performing a trapeze act. He billed himself, "Ehrich, the Prince of the Air." At 12, Ehrich hopped a freight car and ran away from home. A year later her returned to New York and continued to help support his family by working as a messenger, necktie cutter, and photography assistant. Nothing is known of his year away from his family.

About this time, Ehrich and his brother Theo began to pursue an interest in magic. As a stage name, Ehrich Weiss became Harry Houdini by adding an ìiî to the last name of his idol, French magician Robert Houdin. Harry is simply an Americanized version of his nickname, Ehrie. At 17, Ehrich, now known as Harry Houdini, left his family to pursue his magic career. By the age of twenty, Harry had been performing small acts throughout New York. He soon married and joined a circus where he began to develop and perfect his escape tricks.

Houdini gained fame after repeatedly escaping from police handcuffs and jails. Harry was even given certificates from various wardens for escaping from their prisons. After making his name in America, Harry toured Europe, where he expanded his repertoire by escaping from straitjackets and coffins. Eventually, Harry was able to accomplish his dream of having a full show dedicated to his magic.

In 1904, thousands watched as he tried to escape from special handcuffs commissioned by London's Daily Mirror, keeping them in suspense for an hour. Another stunt saw him buried alive and only just able to claw himself to the surface, emerging in a state of near-breakdown. While many suspected that these escapes were faked, Houdini presented himself as the scourge of fake spiritualists. As president of the Society of American Magicians, he was keen to uphold professional standards and expose fraudulent artists. He was also quick to sue anyone who imitated his escape stunts.

In the 1920s, Harry became interested in the occult, specifically in debunking mediums and psychics. His training in magic helped him expose frauds that scientists and academics could not. He chronicled his time investigating the occult in his book, A Magician Among the Spirits.

Houdini made several movies, but quit acting when it failed to bring in money. He was also a keen aviator, and aimed to become the first man to fly a plane in Australia.

In 1926 Houdini died as a result of a ruptured appendix, after suffering a blow to the abdomen by university student J. Gordon Whitehead. Houdini refused to seek medical help and continued to travel, eventually succumbing to peritonitis on October 24, 1926 at the age of 52.