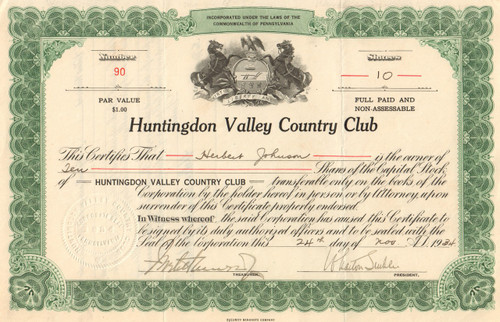 Rare country club piece from outside of Philadelphia.  Nice Pennsylvania state seal as the vignette.  Issued and not cancelled. Dated 1934.

Huntingdon Valley Country Club was organized in June 1897. It was originally a nine hole course and was subsequently expanded to 18 holes after acquiring additional land. The course was later moved to its present site in the mid-1920s. Play started on the 27 hole layout on April 14, 1928.

Members of Huntingdon Valley enjoy a 27-hole golf course, tennis, squash, paddle tennis, swimming and shooting, along with other pastimes such as bridge, dining, and a fitness center.  Huntingdon Valley has a wonderful mix of young, middle age and older Members and there is a true sense of common purpose throughout the membership and the Club's professional staff.

Huntingdon Valley remains in the forefront of inter-club competition in a variety of sports, and its Men's Suburban League Golf Teams have continued the winning tradition established by the founders of the Club in the late 1800's. HVCC's Women's Golf Team has won the prized Philadelphia Cup on numerous occasions, and Huntingdon Valley 's Swim Team is a perennial powerhouse in the Country Club swimming league.

With over 100 years of history and tradition to call upon, the officers, board members, membership and professional staff at Huntingdon Valley Country Club look to the future with a sense of optimism and excitement.