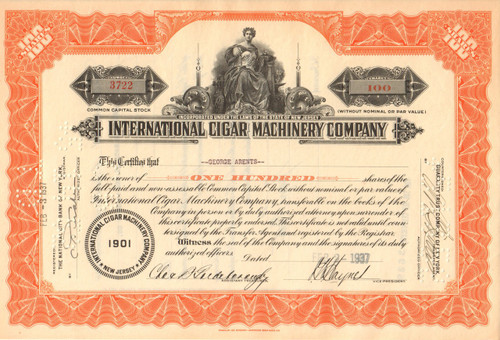 Incorporated in NJ 1901, Rufus Lenoir Patterson, Jr. established the company after successes of other machinery companies under the American Tobacco Company.

In 1893 Patterson organized the Automatic Packing and Labeling Company to develop his first invention, the Patterson Packer, a machine that automatically weighed, packed, stamped, and labeled smoking tobacco. This machine brought Patterson to the attention of James B. Duke of the American Tobacco Company. After viewing the Patterson Packer, Duke reportedly said, "Ding it, your machines are all right, but I also must have you." In 1898, at age twenty-six, Patterson joined the New York office of Duke's firm as supervisor of all its machinery, including his own packer. He became secretary of the company in 1900 and vice-president in charge of manufacturing in 1901.

In 1900 Patterson organized the American Machine and Foundry Company, a subsidiary of the American Tobacco Company, and in 1901 established two other corporations, the International Cigar Machinery Company and the Standard Tobacco Stemmer Company. When American Machine and Foundry became an independent corporation in 1912, Patterson remained president; he held that position until 1941, when he became chairman of the board of directors. By 1920 American Machine and Foundry and its subsidiaries produced must of the machinery used in the tobacco industry, including the automatic cigar maker developed by Patterson at a cost of $5 million. The company then diversified into other areas of automatic packaging, beginning with the standard bread wrapper in 1924. By 1935 Rufus Lenoir Patterson was one of the eight highest-paid executives in the country.

In 1962, the International Cigar Machinery Company merged into the American Machine and Foundry Company, a conglomerate that included automatic cigarette making machines.