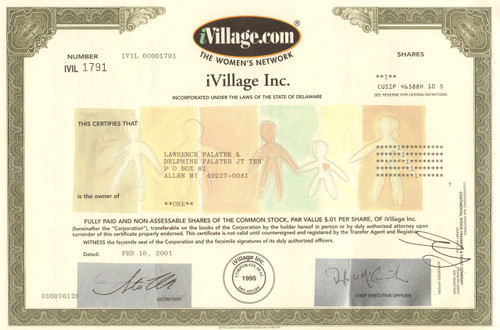 Great vignette of company logo at the top.  Nice under printing  of cartoon family figures over a multicolor background.  Rarely seen piece. Issued and not cancelled. Dated 2001.

iVillage, Inc. was a media company that is owned by NBCUniversal. The site focuses on categories targeted at women, including Entertainment, Beauty & Style, Family, Food, and Health. Additional businesses and brand extensions within iVillage Networks include iVillage UK, Astrology.com, GardenWeb, and NBC Digital Health Network. In addition, iVillage has a strategic partnership with BlogHer, a participatory news, entertainment and information network for women online.  iVillage had  approximately 34 million unique visitors per month. As of February 2015, the iVillage domain redirects to Today's website.

The company was established in New York City in 1995 by Candice Carpenter, along with co-founders Nancy Evans, Robert Levitan, and Tina Sharkey. In 2008, it moved its headquarters to Englewood Cliffs, NJ and in 2009, headquarters were moved back to New York City. The company's first content site was "Parent Soup", a community channel on America Online. The company soon opened up other communities such as "AboutWork", "Better Health & Medical", and "Life Soup".

In 1999, the company underwent an initial public offering with the initial offering price on NASDAQ at was $23. Stock price climbed to nearly $100 in the first day of trading and reached over $130 per share within days, but soon began to decline. Most of the original management and staff left the company. Within two years, following the dot com crash, the stock price fell under $1 per share, the company was threatened with delisting, controversies had arisen over financing irregularities and company management, and the company had never had a profitable quarter and was near bankruptcy. In 2001, under new management, the company merged with its main competitor, women.com. In May, 2006 NBC Universal acquired iVillage. The merger of the site with Today.com was announced in 2013.