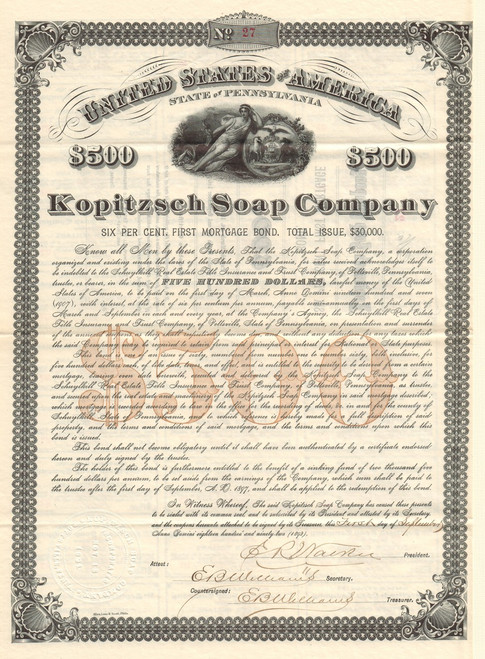 Uncommon soap collectible. Wonderful vignette of a classical female figure leaning against a framed PA state seal. Issued and not cancelled. Dated 1892 in the text.

Schuylkill County Steam Soap And Candle Works was established in 1844, by Charles F. Kopitzsch. The famous brand of "Ocean Soap" was made here; and a score of others, each favorable known in the trade, together with his various brands of wax, sperm and adamantine candles, have made the name of this enterprising German known as widely as that of any manufacturer in Schuylkill county.

Charles F. Kopitzsch was born in Neustadt Germany, April 5th, 1820. In 1843 Mr. Kopitzsch came to Pottsville, and bought of William F. Redlick a small soap and candle factory on Callowhill street, near Railroad, and engaged in the manufacture of candles. 1873 his factory was destroyed by fire, but he immediately bought all of the surrounding lots and built the large three-story brick building which he has since occupied.