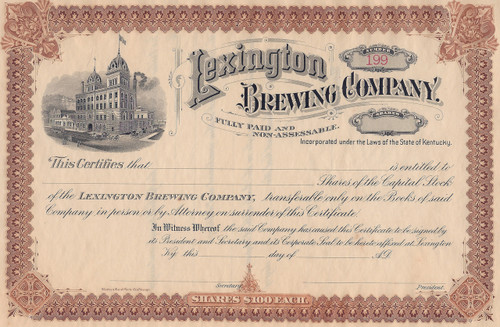 Great brewing cert with the company's brewery as the vignette. Based in Lexington, Kentucky and operated up until the Depression.  Circa 1898 based on issued examples.

In the fall of 1897, J. Henry Zitt of Chicago traveled to Lexington to investigate the possibility of establishing a brewery.[  Mr. Zitt was attracted to the area by its economic prosperity and population growth.  In November, Mr. Zitt moved to Lexington where he would serve as the new brewery's general manager.  On November 17, 1897 Frederick C. Lang as President, J. Henry Zitt as Secretary and Treasurer and John C. Schrain, incorporated the Lexington Brewing Company.

Lang and Zitt were brothers-in-law and were previously associated with the Independent Brewing Association of Chicago.  Frederick C. Lang as President, Charles G. Hutchinson as Vice President and J. Henry Zitt as Secretary formed the Independent Brewing Association in 1890.  The firm built a brewery during the spring of 1891 on the south side of Chicago.  The three owners sold the brewery during September 1896.  This brewery would later become part of Al Capone's empire and produced illegal beer during Prohibition.

The brewery engaged the Chicago architectural firm of Fred W. Wolf & Company to design the buildings and equipment.  Architect Wolf was one of the foremost brewery architects in the nation and pioneered the use of refrigeration in the brewing process. Ground was broken for the new brewery on November 5, 1897.

In December 1897, the brewery hired Theodore Lassig, of Chicago, as the firm's brewmaster.  Mr. Lassig was a native of Saxony Germany, where he learned the brewing trade.  After immigrating to the United States around 1892, he held several brewing positions in the Chicago area.  He would remain the Lexington Brewing Company's brewmaster for the next twenty-five years, until shortly before his death in 1923.  He was the only brewer the company employed.

During April 1898, the fires were lit under the boilers and the machinery was started for the first time.  In early May, the first batch of beer was brewed.  Brewmaster Lassig employed the "German style" lager brewing process to manufacture the firm's beer. n July 1898, the Lexington Brewing Company began marketing Blue Grass Export, Standard Lager and Extra Pale Lager

In July 1904, Mr. Gund introduced Dixie Beer (a pilsner) and continued to brew Blue Grass LagerThe company advertised "Dixie has no equal" and "Blue Grass Lager has no superior as a family malt and hop tonic." The Company discontinued producing Blue Grass Lager around 1906.  Dixie Beer continued as its flagship brand.  In the spring of 1906 and 1907, Old Times Bock was brewed.  During 1908, the brewery introduced the Alt Heidelberg brand of beer.

During December 1919, the brewery began selling Pure Apple Juice for $4.50 per case of pint bottles.  The company also began producing Dixie Beverage, a near beer, and Bone Dry Beverage, a root beer.  Officially, after 1919 the Lexington Brewing Company was only producing legal beverages with a low alcohol content. On June 2, 1922, prohibition agents again raided the Lexington Brewing Company after one of its trucks, loaded with "high proof" beer, was seized.

On July 27, 1936, John C. Bruckmann of Cincinnati acquired the Lexington Brewing Company.[xli]  Mr. Bruckmann, who operated the Bruckmann Brewery of Cincinnati, began to brew and distribute Brucks Dixie from his Cincinnati brewery.  In March 1941, plywood barricades were erected along the sidewalk in front of the brewery, as the wrecking firms began demolition of the old brewery.