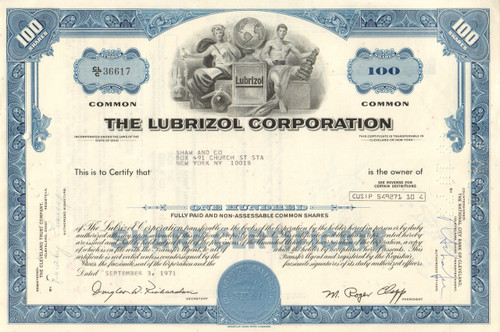 Very nice collectible piece with a great vignette of male and female figures (representing industry and science) seated and flanking the company name supporting a globe. Issued and cancelled. Dated 1971.

On the basis of 2010 profitability metrics, total shareholder return (TSR) and earnings per share growth, Lubrizol was the top performing company among the 16 chemical companies that are on the Fortune 500. As of May 2011, the company was ranked at 1220 in the Forbes Global 2000 list, based on a combination of revenues, net income, assets and market value.[

On March 14, 2011, Berkshire Hathaway announced an agreement to purchase Lubrizol for US$9.7 billion. This happened just weeks after a top Berkshire executive, David Sokol, made a major bet on the stock price with his own money. On April 3, 2014, Lubrizol announced the setting-up of a US$ 50 million compound manufacturing unit in Dahej, Gujarat, which will be Buffett's first investment in India

July 31, 1928: Lubrizol begins.  The Graphite Oil Products Company is incorporated in the state of Ohio.

September 10, 1929: Lubrizol’s first product, a graphited lubricant and applicator marketed under the Lubri-Graph name, is a success. The young company changes its name to The Lubri-Graph Corporation.

August 29, 1931:  The Lubri-Graph Corporation moves to the Cleveland suburb of Wickliffe, Ohio. The location will become the company’s corporate headquarters and remains so today.

February 12, 1934:  As sales of Lubri-Zol special motor lubricant begin to soar, the company changes its name yet again, becoming The Lubri-Zol Corporation. (The hyphen is dropped in the 1940s.) Lubri-Zol establishes Anglamol, Ltd.—later Lubrizol Great Britain, Ltd.—its first affiliate outside the United States and the beginning of its expansion as a global enterprise.

July 15, 1957:  With the acquisition of International Rustproof Corporation, a producer of metal coatings, Lubrizol gains significant technical expertise in coatings technology—expertise that will increase over the years through numerous research and development initiatives.

Growing concerns about air quality and increasing demand for improved engine performance, lead Lubrizol to re-energize its efforts in fuel additives.  As a result, new, multifunctional dispersant gasoline additives are introduced to the marketplace. Before the 1970s, no one thought about fuel economy. That changed with the gas crisis of 1974.  Lines at gasoline stations stretched for blocks, and for the first time, Lubrizol turns its attention to additives to improve total vehicle economy. Lubrizol introduces super high performance diesel oil additives and fuel saving multigrade gear oil additives.

Lubrizol builds on its long-time presence in Asia Pacific by focusing its efforts in China.  The company begins to supply lubricant additives in China through its joint venture facilities in Tianjin and Lanzhou.

Lubrizol continues to expand its presence in the specialty chemical marketplace by making significant acquisitions in the areas of performance coatings and metalworking. In addition, in 1996, the company acquires CPI Engineering Services, Inc., a formulator of specialty synthetic lubricants used in air and refrigeration compressors.