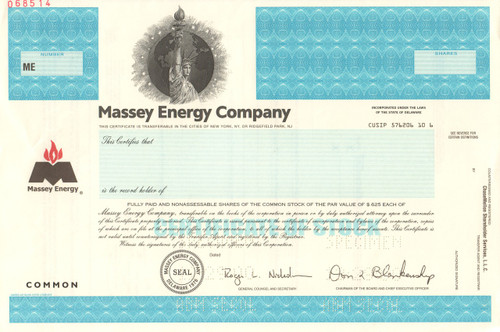 Nice specimen piece.   Nice vignette of the statue of liberty in front of a globe of the earth, company logo is in the left border.  Unissued and cancelled. Specimen dated 2000 from perforation cancellation.

Massey Energy Company was a coal extractor in the United States with substantial operations in West Virginia, Kentucky and Virginia. By revenue, it was the fourth largest producer of coal in the United States and the largest coal producer in Central Appalachia. Massey's mines yielded around 40 million tons annually. The company controlled 2.3 billion tons of proven and probable coal reserves in Southern West Virginia, Eastern Kentucky, Southwest Virginia and Tennessee or about a third of all Central Appalachian reserves. It employed approximately 5,850 people and operated 35 underground mines and 12 surface mines.

In January 2011, it was announced that Massey Energy company would be bought by competitor Alpha Natural Resources for $7.1 billion. More than 99% of Massey shareholders and 98% of Alpha shareholders voted in favor of the acquisition and courts in Delaware and West Virginia agreed with the shareholders' vote.

A.T. Massey incorporated the A.T. Massey Coal Company in 1920 as a coal brokering business in Richmond, Virginia, and served as the company’s first president. A.T. Massey acquired its first mining operation in 1945 and expanded its business to include coal mining and processing. Five generations of the Massey headed the company, including Evan Massey in 1945, William E. Massey in 1962 and E. Morgan Massey in 1972.

A.T. Massey completed a reverse spin-off from Fluor Corporation in 2000 and was renamed Massey Energy Company. As of 2010, Massey Energy produced, processed, and sold bituminous coal of steam and metallurgical grades, primarily of low sulfur content, through its 22 processing and shipping centers, called "resource groups," many of which received coal from multiple coal mines