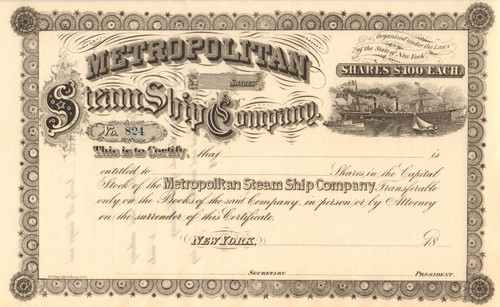 Fantastic maritime collectible old stock. This cert has a great vignette of a paddlewheel steamboat on a river with smaller craft and a city skyline behind. Unissued and not cancelled. Circa 1866 from company records.

The Metropolitan Steamship Company was established after the Civil War to operate steamships on the "outside route" between Boston and New York City around Cape Cod. The company was organized in February 1866 by Peter Butler, James B. Taft, Thomas Clyde, Brigadier General James Scollay Whitney, and Whitney's elder son, Henry Melville Whitney. One of the objectives of the investors was to place in remunerative service vessels they owned which were presently idle. James S. Whitney, who had been collector of customs for the Port of Boston in 1860–61, was elected president; Henry M. Whitney was named agent at Boston. Other members of the family eventually became financially interested in the company, including Whitney's younger son, William Collins Whitney, and his sons-in-law, Henry F. Dimock and Charles T. Barney.

Service was inaugurated in 1866 by Captain George L. Norton with the steamer Ashland, a wooden propeller of 843 gross tons, built in 1853 at Philadelphia and owned by Thomas Clyde. The Ashland was soon followed into service by the Jersey Blue, City of Bath, Mary Sanford, Salvor, Relief, Miami, Monticello and Fairbanks. Oldest of these was the Jersey Blue, a 368-ton, 133-foot wooden propeller built in 1850 at Newark, New Jersey. All were propellers except the Miami, a sidewheeler built in 1861–62 by the Philadelphia Navy Yard as the gunboat USS Miami and sold for mercantile use in 1865. In December 1866 the wooden propellers Nereus, Glaucus and Neptune were purchased from the failed Merchants' Steamship Company.

The line's first iron-hulled propeller, the General Whitney, was built in 1873 by Harlan & Hollingsworth at Wilmington, Delaware. A vessel of 1,848 tons, she measured 227 feet in length with a beam of 40 feet, and was propelled by two-cylinder compound engines. In 1884 the 2,625-toon iron propeller H.F. Dimock was built by William Cramp and Sons at Philadelphia and named for the line's New York agent. While on her customary route from New York to Boston the steamer H.F. Dimock collided with William K. Vanderbilt's yacht, the Alva, in the Pollock Rip Slough, a narrow channel of Vineyard Sound, on July 24, 1892, sinking the Alva.

On October 8, 1909, Metropolitan's assets were sold at foreclosure sale to John W. McKinnon of Chicago. The company was reincorporated in Maine on October 11, 1909, with Morse as president, McKinnon as vice president, Charles L. Andrews as secretary and Campbell Carrington as treasurer.

Service on Eastern's various routes was gradually reduced in the 1930s. The steamer New York left Manhattan on the last sailing of the Metropolitan Line on November 29, 1941.