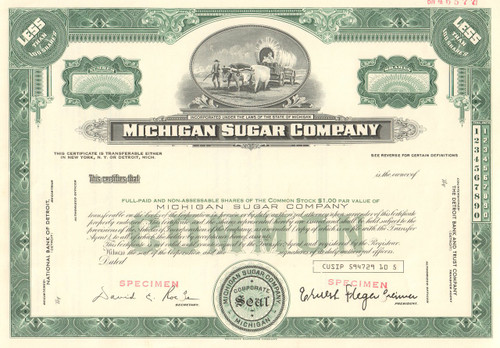 Nice collectible. Great vignette of a ox driven covered wagon with a pioneer family. Specimen. Circa 1970's from issued examples

Michigan Sugar Company is an agricultural cooperative, based in Bay City, Michigan, that specializes in the processing of beet sugar. Founded in 1906, Michigan Sugar sells beet sugar under the brand names Big Chief and Pioneer.

Michigan Sugar operates four beet sugar mills, all located in the U.S. state of Michigan, and operates three shipping and distribution centers in Michigan and the adjacent state of Ohio. The firm has a permanent employment headcount of 450 employees, to which are added 1,750 additional seasonal employees during the times of year when sugar beets are harvested and processed.

During much of its history, Michigan Sugar was a publicly traded, private-sector firm.

After the 2001 bankruptcy of Imperial Sugar, Michigan Sugar went cooperative in February 2002. Since that time the cooperative has been owned by a consortium of more than 1,000 sugar beet farmers who grow beets, mostly in Michigan's Thumb, for processing.