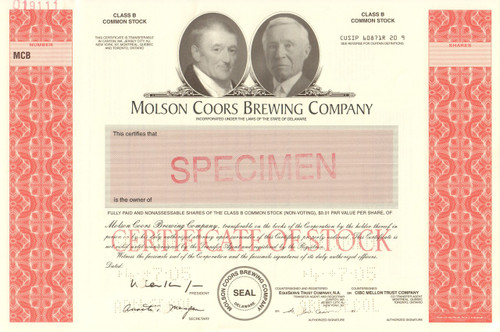 Rare specimen issue for this famous beer company. Awesome vignette of the founders of the respective brewers.  Dated 2005 from the perforation marks by the printer American Banknote. Very clean and crisp printer archive example.

While the company is incorporated in the United States, it is traded on stock exchanges in both the United States and Canada, and control is equally shared between the Molson and Coors families. Molson Coors expanded significantly after the merger of Anheuser-Busch InBev and SABMiller in October 2016. This was achieved because during the plans for the merger, SABMiller had agreed to divest itself of the Miller brands by selling its stake in MillerCoors to Molson Coors.

Coors
In 1873, German immigrants Adolph Coors and Jacob Schueler from Prussia emigrated to the United States and established a brewery in Golden, Colorado, after buying a recipe for a Pilsner-style beer from a Czech immigrant William Silhan. Coors invested $2,000 in the operation, and Schueler invested $6,000. In 1880, Coors bought out his partner and became sole owner of the brewery.

The Coors Brewing Company managed to survive Prohibition relatively intact. Years before the Volstead Act went into effect nationwide, Adolph Coors with sons Adolph Jr., Grover, and Herman established the Adolph Coors Brewing and Manufacturing Company, which included Herold Porcelain and other ventures. The brewery itself was converted into a malted milk and near beer production facility. Coors sold much of the malted milk to the Mars candy company for the production of sweets. Manna, the company's non-alcoholic beer replacement, was a near beer similar to current non-alcoholic beverages. However, Coors and his sons relied heavily on the porcelain company as well as a cement and real estate company to keep the Coors Brewing Company afloat. By 1933, after the end of Prohibition, the Coors brewery was one of only a handful of breweries that had survived.

On May 2, 1782, at the age of 18, John Molson left England for Canada, landing in Montreal on June 26. Shortly after his arrival, he began working at the Thomas Loyd brewery. He went on to purchase it in an auction in 1784. Not long after his arrival in Montreal in 1782, Molson sensed the market potential for beer in the then British colony. Prices for wine, rum and port were rising and an influx of English and Irish immigrants were particularly partial to beer. When he came of legal age, Molson used the money inherited from his parents to acquire a small brewery housed in a wooden building on the shores of the St Lawrence, just outside the fortifications of the burgeoning City of Montreal.

In 1785, he temporarily closed his business to cross the Atlantic in search of the modern equipment and ingredients. Upon his return, he offered the seeds free of charge to neighbouring Montreal farmers, who agreed to grow them to satisfy the brewery's need for malt. Molson delivered his first brew, an ale in 1786, only six weeks after taking the helm. Priced at five cents a bottle, his brew sold well.

Molson took advantage of the many business opportunities of the time. He quickly diversified his investments, opened a lumber yard and began issuing loans to local Montreal merchants. In 1816, the family enterprise began to take shape when founder John Molson entered into an association with his three sons, John junior, Thomas and William. Although brewing proved to be Molson's most sustainable field of endeavour, other activities were added down through the company's lengthy history. Molson was the first company to own and operate a fleet of steamboats, which were used to transport people and goods between Quebec and Ontario. John Molson and his sons also founded the Molson Bank, which later merged with the Bank of Montreal.

In 1816, John Molson formed a partnership with his three sons – John, Thomas and William. It was Thomas who would eventually follow in his father's footsteps by continuing the Molson brewing tradition and upholding the high standards of quality. In 1903, inspired by the popularity of imported beers, Herbert Molson, Thomas’ grandson, and brew master John Hyde created Molson Export, an authentic ale brewed in the classic style, developed by John Molson.