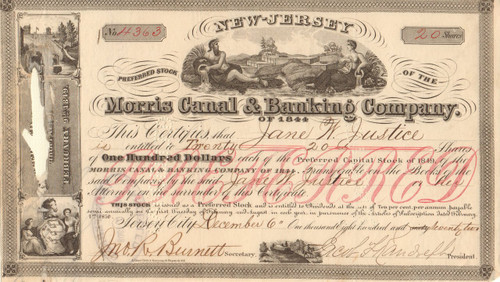 The original company (established 1824) failed in 1841 amid banking scandals, and the canal was leased to private bidders for 3 years. The canal company was reorganized in 1844, with a capitalization of $1,000,000. The canal bed was inspected, and improvements were made. First, the places where seepage occurred were lined with clay, and two feeders were dug, to Lake Hopatcong and to Pompton. The inclined planes were rebuilt with wire cabling. Banking privileges were removed in 1849, leaving the company as a canal-operating business only.

The Morris Canal was a 107-mile canal across northern New Jersey in the United States. In use from the late 1820s to the 1920s, it stretched from Phillipsburg on the Delaware River eastward to Jersey City on the Hudson River. It was considered an ingenious technological marvel for its water-driven inclined planes to cross the northern New Jersey hills. The Morris Canal was sometimes called the Morris and Essex Canal due to confusion with the nearby Morris and Essex Railroad.

Completed to Newark in 1831, the canal was extended eastward to Jersey City between 1834 and 1836. It eased the transportation of anthracite coal from Pennsylvania's Lehigh Valley to northern New Jersey's growing iron industry and other developing industries in New Jersey and the New York City area. It also carried iron ore westward to iron furnaces in western New Jersey and eastern Pennsylvania until the development of Great Lakes iron ore caused them to decline. By the 1850s, the canal began to be eclipsed by the construction of railroads, although it remained in heavy use through the 1860s. It was leased to the Lehigh Valley Railroad in 1871, taken over by the state of New Jersey late in 1922, and formally abandoned in 1924.

On the canal's western end, at Phillipsburg, a cable ferry allowed Morris Canal boats to cross the Delaware River westward to Easton, Pennsylvania, and travel up the Lehigh Canal to Mauch Chunk, in the anthracite coal regions, to receive their cargoes from the mines. From Phillipsburg, the Morris Canal ran eastward through the valley of the Musconetcong River, which it roughly paralleled upstream to its source at Lake Hopatcong, New Jersey's largest lake. From the lake the canal descended through the valley of the Rockaway River to Boonton, eventually around the northern end of Paterson's Garret Mountain, and south to its 1831 terminus at Newark on the Passaic River. From there it continued eastward across Kearny Point and through Jersey City to the Hudson River. The extension through Jersey City was at sea level and was supplied with water from the lower Hackensack River.

With its two navigable feeders, the canal was 107 mi long. Its ascent eastward from Phillipsburg to its feeder from Lake Hopatcong was 760 ft, and the descent from there to tidewater was 914 ft. The surmounting of the height difference was considered a major engineering feat of its day, accomplished through 23 locks and 23 inclined planes — essentially, short railways that carried canal boats in open cars uphill and downhill using water-powered winches. Inclined planes required less time and water than locks, although they were more expensive to build and maintain.

The idea for constructing the canal is credited to Morristown businessman George P. MacCulloch, who reportedly conceived the idea while visiting Lake Hopatcong. In 1822, MacCulloch brought together a group of interested citizens at Morristown to discuss the idea.

On December 31, 1824, the New Jersey Legislature chartered the Morris Canal and Banking Company, a private corporation charged with the construction of the canal. The corporation issued 20,000 shares of stock at $100 a share, providing $2 million of capital, divided evenly between funds for building the canal and funds for banking privileges. The charter provided that New Jersey could take over the canal at the end of 99 years. In the event that the state did not take over the canal, the charter would remain in effect for 50 years more, after which the canal would become the property of the state without cost.