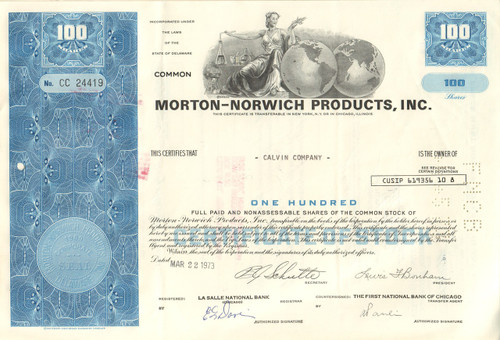 Great collectible piece with a nice vignette of a classical female figure with laboratory equipment next to two hemispheres of the earth.  Issued and cancelled. Dated in the 1970's.

Paul and Joy Morton and others were sued for stock manipulation of Indiana, Illinois & Iowa Railroad stock by attorneys for the estate of John S. Cooper.  Joy Morton financed the Morkrum Printer, the forerunner of the Teletype, which replaced Morse code operators. His son, Sterling Morton, was a director and chairman of the board of Morton, and was also president of the Teletype Corporation until 1930, when he and his wife sold their stock to AT&T.  Their brother, Paul Morton, was president of the Mutual Life from 1905 until his death in 1911, and his daughters, Pauline and Caroline Morton, were married to Charles H. Sabin and William C. Potter, the presidents/chairmen of the Guaranty Trust.

In 1969, Morton International merged with Norwich Pharmacal, and became Morton-Norwich Products, Inc.  Morton-Norwich attempted to market "Bonded Carbon Plugs" as cigarette filters to the American Tobacco Company, for use in Tareyton cigarettes.

In 1982, Morton International merged with the Thiokol Corporation, developers of rocket fuel and automotive airbags, and also acquired Philip Morris' chemical division. Meanwhile, Procter & Gamble acquired the Norwich Eaton pharmaceutical business from Morton Norwich, including Pepto-Bismol, Cloraseptic, and Norwich aspirin. In 1996, Morton's airbag business was spun off to Autoliv of Sweden, and in 1999 Morton was acquired by Rohm & Haas of Philadelphia.

The companies roots date back to 1848 when Alonzo Richmond arrived in Chicago from Syracuse, New York, to open his new business: Richmond & Company, Agents for Onondaga Salt. In 1910, the company’s name was changed to the Morton Salt Company (several years after Joy Morton gained a controlling interest in the company).

In 1914, the famous Morton Umbrella Girl and "When It Rains It Pours" slogan first appeared on the blue package of table salt and in a series of Good Housekeeping magazine advertisements. The slogan was adapted from an old proverb, "It never rains but it pours."

The company was started in 1855 by the Rev. Lafayette F. Moore, a Baptist preacher, who went into business as “L.F. Moore Pill Manufacturer,” in a rented room on Mitchell Street.  He formed a partnership with Oscar G. Bell in 1886 and with the increased business they moved to a building on East Main Street.

Later that year, Mr. Moore left the company.  Then Mr. Bell and two other partners formed the Norwich Pharmacal Company, which was incorporated in 1890.  The company improved an old formula for a surgical dressing and “Unguentine” grew to be the mainstay of the company for more than four decades.  Around 1901, the company acquired, “Mixture Cholera Infantum” from a doctor who developed it.  This was for the treatment of “diarrhea cholera,” a serious threat to young children.  Adults also found the formula provided a relief of indigestion and diarrhea.  Acetylsalicylic acid (Norwich aspirin) tablets were added to the company’s product line. In 1939, Norwich Pharmaceutical stock was listed on the New York Stock Exchange.

The company then renamed the formula Pepto-Bismol with its famous pink color.  The company has continued to grow and entered the field of basic research along with manufacturing.  It has developed and manufactured Furadantin, Macrodantin, and Norwich Aspirin to name a few.

During World War II, the company earned the Army-Navy ‘E’ Award with four added stars in recognition of its support of the troops and war effort. In 1982, the company, then called Norwich Eaton Pharmaceuticals, became a wholly owned subsidiary of the Procter & Gamble Company. In the mid-1990s, Norwich constructed an Intermediate Potency solid dose form facility, from which the osteoporosis drug Actonel was launched.