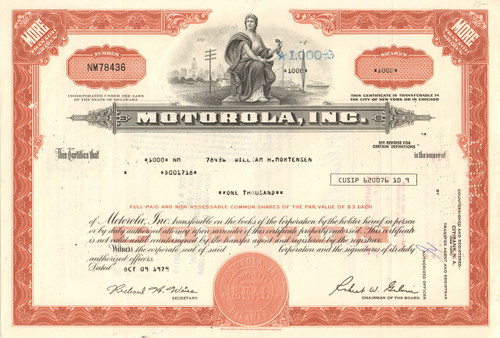 Uncommon collectible piece with a great vignette of a classical female figure holding a phone in front of a city scene and telephone poles. Issued and cancelled. Dated 1979.

Motorola, Inc. was a multinational telecommunications company based in Schaumburg, Illinois, United States (U.S.). After having lost $4.3 billion from 2007 to 2009, the company was divided into two independent public companies, Motorola Mobility and Motorola Solutions on January 4, 2011. Motorola Solutions is generally considered to be the direct successor to Motorola, Inc., as the reorganization was structured with Motorola Mobility being spun off.

Motorola's wireless telephone handset division was a pioneer in cellular telephones. Also known as the Personal Communication Sector (PCS) prior to 2004, it pioneered the "mobile phone" with DynaTAC, "flip phone" with the MicroTAC as well as the "clam phone" with the StarTAC in the mid-1990s. It had staged a resurgence by the mid-2000s with the RAZR, but lost market share in the second half of that decade. Later it focused on smartphones using Google's open-source Android mobile operating system. The first phone to use the newest version of Google's open source OS, Android 2.0, was released on November 2, 2009 as the Motorola Droid (the GSM version launched a month later, in Europe, as the Motorola Milestone).

Motorola started in Chicago, Illinois, as Galvin Manufacturing Corporation in 1928 when brothers, Paul V. and Joseph E. Galvin, purchased the bankrupt Stewart Battery Company's battery-eliminator plans and manufacturing equipment at auction for $750. Galvin Manufacturing Corporation set up shop in a small section of a rented building. The company had $565 in working capital and five employees. The first week's payroll was $63.

The company's first products were battery-eliminators, devices that enabled battery-powered radios to operate on household electricity. Due to advances in radio technology, battery-eliminators soon became obsolete. Paul Galvin learned that some radio technicians were installing sets in cars, and challenged his engineers to design an inexpensive car radio that could be installed in most vehicles. His team was successful, and Galvin was able to demonstrate a working model of the radio at the June 1930 Radio Manufacturers Association convention in Atlantic City, New Jersey. He brought home enough orders to keep the company in business.

Many of Motorola's products have been radio-related, starting with a battery eliminator for radios, through the first hand-held walkie-talkie in the world in 1940, defense electronics, cellular infrastructure equipment, and mobile phone manufacturing. In the same year, the company built its research and development program with Dan Noble, a pioneer in FM radio and semiconductor technologies, who joined the company as director of research. The company produced the hand-held AM SCR-536 radio during World War II, which was vital to Allied communication. Motorola ranked 94th among United States corporations in the value of World War II military production contracts.

Beginning in 1958 with Explorer 1 Motorola provided radio equipment for most NASA space-flights for decades including during the 1969 moon landing. A year later it established a subsidiary to conduct licensing and manufacturing for international markets.

Motorola created numerous products for use by the government, public safety officials, business installments, and the general public. These products included cell phones, laptops, computer processors, and radio communication devices. The Motorola RAZR line sold over 120 million units, which brought the company to the number two mobile phone slot in 2005.

In 1969 Neil Armstrong spoke the famous words "one small step for a man, one giant leap for mankind" from the Moon on a Motorola transceiver. In 1973 Motorola demonstrated the first hand-held portable telephone. In 1974 Motorola introduced its first microprocessor, the 8-bit MC6800, used in automotive, computing and video game applications. In 1976 Motorola moved its headquarters to the Chicago suburb of Schaumburg, Illinois. In 1980 Motorola’s next generation 32-bit microprocessor, the MC68000, led the wave of technologies that spurred the computing revolution in 1984, powering devices from companies such as Apple, Commodore, Atari, Sun, and Hewlett Packard.

Dr. Martin Cooper of Motorola made the first private handheld mobile phone call on a larger prototype model in 1973.  In September 1983, the U.S. Federal Communications Commission (FCC) approved the DynaTAC 8000X telephone, the world's first commercial cellular device. By 1998, cell phones accounted for two thirds of Motorola's gross revenue. The company was also strong in semiconductor technology, including integrated circuits used in computers. The processors were used used in Atari ST, Commodore Amiga, Color Computer, and Apple Macintosh personal computers and in the early HP laser printers, and some 6800-family peripheral devices were used in the IBM PC series of personal computers.

On September 15, 1999, Motorola announced it would buy General Instrument in an $11 billion stock swap. General Instrument had long been the No. 1 cable TV equipment provider, supplying cable operators with end-to-end hybrid fiber coax cable solutions. In 1999 Motorola separated a portion of its semiconductor business—the Semiconductor Components Group (SCG)-- and formed ON Semiconductor, located in Phoenix, Arizona.

In June 2000 Motorola and Cisco supplied the world's first commercial GPRS cellular network to BT Cellnet in the United Kingdom. The world's first GPRS cell phone was also developed by Motorola. In August 2000 with recent acquisitions, Motorola reached its peak employment of 150,000 employees worldwide. Two years later, employment would be at 93,000 due to layoffs and spinoffs.

In January 2011 Motorola split into two separate companies, each still using the word Motorola as part of its name. One company, Motorola Solutions (using a blue version of the Motorola logo), is based in the Chicago suburb of Schaumburg, Illinois, and concentrates on police technologies, radios, and commercial needs. The other company, Motorola Mobility (using a red logo), is based in Chicago (formerly in the Chicago suburb of Libertyville, Illinois), and is the mobile handset producer. The split was structured so that Motorola Solutions was the legal successor of the original Motorola, while Motorola Mobility was the spin-off.

On October 30, 2014, Google sold off Motorola Mobility to Lenovo. The purchase price was approximately US $2.91 billion (subject to certain adjustments), including US$1.41 billion paid at close: US $660 million in cash and US$750 million in Lenovo ordinary shares (subject to a share cap/floor). The remaining US$1.5 billion was paid in the form of a three-year promissory note.

After the purchase, Google maintained ownership of the vast majority of the Motorola Mobility patent portfolio, including current patent applications and invention disclosures, while Lenovo received a license to the portfolio of patents and other intellectual property. Additionally Lenovo received over 2,000 patent assets, as well as the Motorola Mobility brand and trademark portfolio.