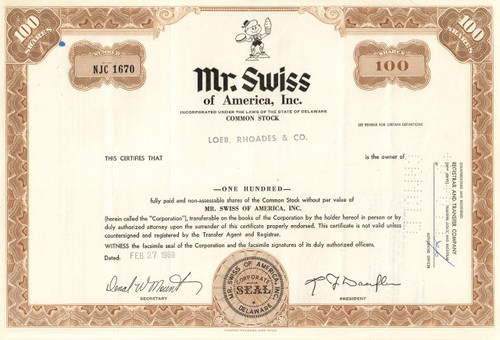 Cool novelty stock with a cute vignette of a little boy balanced on the Alps with a hamburger and soft serve ice cream cone. Issued and cancelled. Dated 1970.

The chain was started in 1964 by L.J. Doerfler and featured a diverse menu that included 34 soft-style ice cream flavors and 11 sandwiches ranging from a 25-cent hot dog or hamburger to a 69-cent corned beef and roast beef sandwich.

Doerfler’s father, Lawrence M. Doerfler, died in 1961 at age 55. Doerfler Sr. was apparently a big shot on the southside and ran a construction company he founded in 1936 at 1111 E Commerce. And 1111 E Commerce starts to show up in classified advertisements in 1964 seeking Tastee Freeze franchisees. Just one year later 1111 E Commerce is listed as the Mr. Swiss headquarters run by L.J. Doerfler.

Thanks to an aggressive franchising strategy that included advertising in newspapers from Seattle to Florida, the Oklahoma City-based chain grew to 175 locations as of 1969. It was that year that Newsweek singled out the company as one of seven new public issues in franchising field that more than doubled within weeks of going public.

In a 1969 interview with The Oklahoman, Doerfler predicted the chain was about to grow to more than 2,200 with restaurants under contract or being built. “When we began to plan for Mr. Swiss, we made a detailed study of existing food franchises,” Doerfler said. “We attempted to incorporate the good points of all of them and to improve all areas that were weak.”

The sales pitch to potential franchisees promised guaranteed leases and extensive support from the Oklahoma City office to ensure success. But even as the chain as clearly exploding in size, Doerfler was turning his attention to other ventures, including acquisition of Dutch Boy of American, an automatic car wash franchise operation, and even started up a banking arm. Doerfler promised he was turning the operation over to a trusted hand, W.R. Thompson, a former executive vice president with Mr. Swiss. Thompson, however, had an odd outlook on restaurant skills needed to be a successful franchisee.

“A person with absolutely no food experience can be a successful Mr. Swiss store operator,” Thompson said. “We have taken all the guesswork out of store operations. Our training program is the best and each facet of store operation is outlined in a store owner’s manual. Every store has the full backing of the parent company and franchise holder.”

It appears as if something went amiss with the company’s sale to First World Corp., a New York investment firm led by Christos Netelkos. SEC records show the April 30, 1971 sale of Mr. Swiss for $3.725 million marked the end of majority control by Doerfler, though news accounts indicated he was staying on board as a marketing executive.

A year later we see an SEC investigation into securities violations by Netelkos regarding registration provisions to shareholders of Mr. Swiss. By now the franchise campaign has disappeared from newspapers and we see the first hints of financial troubles among some of the franchisees.

Over the next several years advertisements appear for Mr. Swiss restaurant sales without any franchise requirements. Court records show a legal fight breaking out between on franchisee and the franchise holder for Missouri. In 1979, we see a Connecticut advertisement for a Mr. Swiss franchise for sale.

And then nothing. Sort of. Over the next decade we see Netelkos convicted and jailed for stock swindling. News accounts show his exploits earn him notice as one of the country’s most notable “stock swindlers,” going so far as to pull one scam while on the lam.