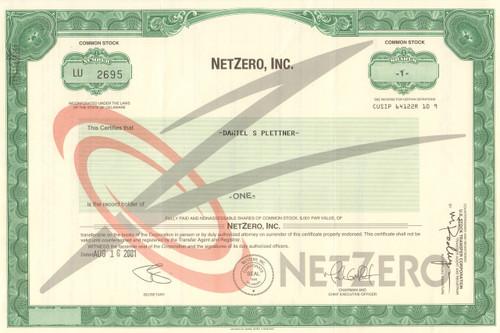 Famous internet collectible. Very nice imprint of the company logo across the entire certificate face. Issued and not cancelled. Dated 2001.

NetZero is an Internet service provider based in Woodland Hills, Los Angeles, California. It is a subsidiary of United Online, owner of Juno Online Services and BlueLight Internet Services.

NetZero launched in October 1998, founded by Ronald T. Burr, Stacy Haitsuka, Marwan Zebian and Harold MacKenzie. The first national free Internet service provider, NetZero grew to 1,000,000 users in six months. NetZero's model was free Internet access to attract an audience for highly targeted advertising. The ad serving technology has over 9 patents and NetZero was the first company to invent real-time URL targeted advertising based on surfing patterns. In September 1999 NetZero went public on the NASDAQ exchange with the symbol NZRO.

In late 1999 several other companies began to copy the NetZero free access model including Juno Online Services, Spinway launched with Yahoo! and AltaVista, Freei and BlueLight Internet, which was originally owned by Kmart. They claimed to offer free Internet service forever, in exchange for displaying ads, either on a permanent toolbar or on a "banner" that was shown when online. NetZero sued them for infringing on a banner ad patent. After the dot-com bust in early 2001, NetZero acquired its competitors as each went bankrupt.

Starting in January 2001, NetZero began charging for access time over 40 hours per month. Users who exceeded 40 hours were directed to the company's "Platinum" service, which provided unlimited access for $9.95 per month. With the income statement reinvigorated through charging heavier users of the system, NetZero merged with its rival Juno Online Services and created a new holding company, United Online which now trades on NASDAQ under the symbol UNTD.