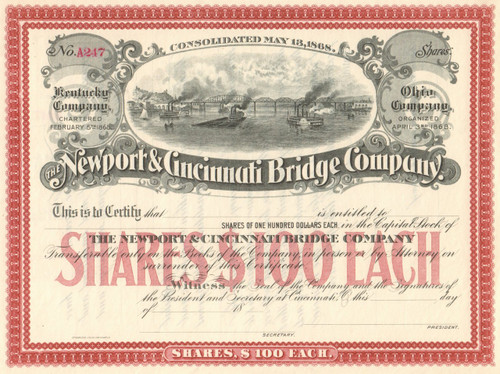 Cool historical collectible.  Great vignette of the original bridge over the Ohio River with various steamship paddle wheelers nearby. Unissued and not cancelled. Dated 18__.  Circa 1868 from company records.

Chartered 1868 in both Ohio and Kentucky. The original bridge first opened on April 1, 1872, under the name Newport and Cincinnati Bridge, and was Cincinnati's first railroad bridge spanning the Ohio River. The bridge piers were built with stone from Adams County, Ohio. The present bridge opened in 1896 to streetcar, pedestrian and automobile traffic. In 1904, the bridge was renamed the L&N (Louisville and Nashville) Railroad Bridge, and this name remained until the bridge was rehabilitated and re-opened as a pedestrian-only bridge in May 2003.

The bridge was closed to railroad traffic in 1987, and later closed to automobile traffic in October 2001 after years of neglect and deterioration. On April 17, 2001, the L&N Railroad Bridge was listed on the National Register of Historic Places. In late 2001, the city of Newport, Kentucky, and Southbank Partners, an economic development group, used $4 million in state funds to restore the bridge. When it was time to decide on what color to paint it, a variety of options were explored. Computer-generated images of the bridge were shown to participants in more than a dozen focus groups, all of whom picked the color purple as a top choice. It was soon coined the "Purple People Bridge" by area residents.

The bridge provides convenient access to the "Newport on the Levee" development in Newport, Kentucky, as well as Downtown Cincinnati. In 2006, it became possible for the public to cross the bridge via its superstructure wearing appropriate safety gear. There are similar bridge climb experiences in Australia and New Zealand. Citing lack of funds and low attendance, the Purple People Bridge Climb closed on May 23, 2007. The bridge remains open to pedestrian and bicycle traffic.