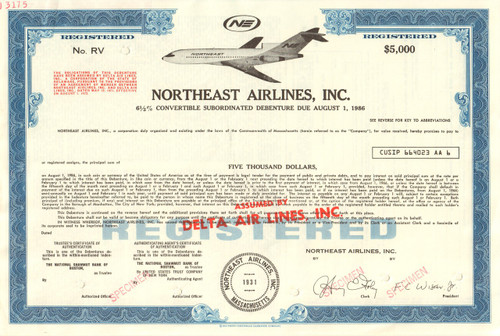 Rare airline piece.  Fantastic vignette of a Boeing 727 in company design.  Company logo above.  Unissued and not cancelled. Specimen circa 1972 based on stamp "Assumed by Delta Air Lines"

The airline began as Boston-Maine Airways, founded as a Pan Am contract carrier on July 20, 1931, by the Boston and Maine Railroad and Maine Central Railroad, flying from Boston to Bangor via Portland. It flew only sporadically until August 11, 1933, when it began contract service for National Airways, an agreement which lasted four years. The name Northeast Airlines was adopted on November 19, 1940.

During World War II Northeast pioneered regular transatlantic service for the military under contract from the U.S. Army Air Forces. After the war they applied for authorization to operate passenger service across the Atlantic but were stymied by the Civil Aeronautics Board, which awarded the routes to Pan American World Airways and TWA. The January 1945 OAG shows Northeast flights to seven cities, ranging from Boston to Moncton. There were just four departures a day from Boston and four return flights - nothing else.

Northeast's Convair 240s and DC-3s did not fly south or west of New York/Newark until 1956 when they added flights to Washington National. In 1957 they added three DC-6B "Sunliner" nonstops from La Guardia to Miami. Northeast ordered ten turboprop Vickers Viscounts in the late 1950s and used them until financial problems in the early 1960s forced the company to return them to the manufacturer. Northeast leased a single Boeing 707 from TWA for 1959-60 winter flights to Florida. In 1960 Northeast leased six Convair 880s and flew them to Florida for several years.

In 1965 the airline was bought by Storer Broadcasting, who tried to rejuvenate Northeast with a new marketing campaign and new aircraft. Northeast ordered a fleet of Boeing 727s for their Florida routes, and Douglas DC-9 twinjets and Fairchild FH-227 turboprops for shorter routes. These "Yellowbirds" had a new two-tone yellow and white livery. In 1966 Northeast was the launch customer for the Boeing 727-200, which they began flying in December 1967. Except for Florida their network was all north and east of Washington National until 1969 when they added three 727 nonstops Miami to Los Angeles, with Fort Lauderdale getting a short-lived LAX nonstop soon after. (Fuel stops were sometimes needed.)

Despite a modern fleet and the Yellowbird marketing campaign, Northeast remained at a disadvantage against larger competitors such as Eastern Airlines and National Airlines. By the early 1970s Northeast's financial condition was such that they sought a merger or a sale. On August 1, 1972 Northeast merged with Delta Air Lines. Northeast's contribution to Delta included access to the Boston market, which Delta did not serve under the then-regulated airline industry. Delta added the Boeing 727 to their fleet, a type they did not operate prior to absorbing Northeast. Delta used this tri-jet airliner as the workhorse of their fleet during the 1970s and 1980s.