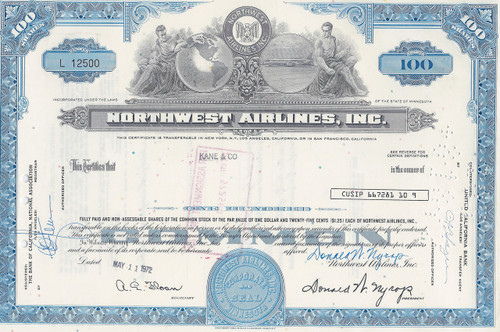 Very nice stock cert with a great vignette of two Greek male figures, a globe, a jet plane, and the company logo of the time.  Issued and cancelled. Dated 1972.  Great collectible for this former airline.

Northwest Airlines Corp.  was a major United States airline founded in 1926 and absorbed into Delta Air Lines Inc. by a merger. Approved on October 29, 2008, the merger made Delta the largest airline in the world until the American Airlines-US Airways Merger on December 9, 2013. Northwest continued to operate under its own name and brand until the integration of the carriers was completed on January 31, 2010.

Northwest was headquartered in Eagan, Minnesota near Minneapolis-St. Paul International Airport. After World War II it became dominant in the trans-Pacific market with a hub in Tokyo, Japan. After acquiring Republic Airlines in 1986, Northwest also established major hubs at Detroit Metropolitan Wayne County Airport and Memphis International Airport. In 1993 it began a strategic alliance with KLM and a jointly-coordinated European hub at Amsterdam.

Prior to its merger with Delta, Northwest was the world's sixth largest airline in terms of domestic and international scheduled passenger miles flown and the US's sixth largest airline in terms of domestic passenger miles flown. In addition to operating one of the largest domestic route networks in the U.S., Northwest carried more passengers across the Pacific Ocean than any other U.S. carrier, and carried more domestic air cargo than any other American passenger airline. Regional flights for Northwest were operated under the name Northwest Airlink by Mesaba Airlines, Pinnacle Airlines, and Compass Airlines. Northwest Airlines was a minority owner of Midwest Airlines, holding a 40% stake in the company.

Northwest Airlines was founded on September 1, 1926, by Colonel Lewis Brittin, under the name Northwest Airways. Like other early airlines, Northwest's focus was not in hauling passengers, but in flying mail for the U.S. Post Office Department. Northwest Airlines began carrying passengers in 1927. In 1928, Northwest started its first international route with service to Winnipeg. In 1929, a group headed by Richard Lilly, a businessperson from St. Paul, Minnesota, purchased the airline.

With its new system of transpacific flights established, Northwest began to advertise itself as Northwest Orient Airlines, although its registered corporate name remained "Northwest Airlines."  For years Northwest was the largest foreign airline serving Japan. In 1951 Northwest became involved with the founding of Japan Air Lines (JAL) by leasing airliners and crewmembers to the new airline.

During the postwar regulated era, Northwest's domestic network remained focused around the northern transcontinental route through New York, Boston, Chicago, Minneapolis and Seattle. Northwest also served Hawaii from the West Coast, and Georgia and Florida from Chicago.  After airline deregulation in 1978, Northwest began nonstop flights to other Asian cities, returned to China in 1984.

On May 21, 1984, shareholders in Northwest approved the creation of NWA Inc., a Delaware corporation that became the holding company of Northwest. On October 1, 1986, Northwest merged with Republic Airlines. It was the largest airline merger in history at the time. One major reason for the merger was that Northwest's unique position as a domestic and transpacific carrier had been challenged in 1985 when United Airlines acquired the Pacific Division of Pan Am.

Northwest was purchased in a 1989 leveraged buyout by an investment group headed by Al Checchi, Fred Malek and Gary Wilson, with KLM, and many others. To pay off the debt incurred in their takeover, the new management sold many of the airline's aircraft to leasing companies. , and sold property around the world, including land in central Tokyo. In 1993, Northwest began its strategic alliance with KLM, which was the largest airline partnership ever conceived at the time.

Throughout the late 1990s and early 2000s, Northwest enjoyed profits and focused on improving technology to increase convenience while reducing costs. The airline offered airport self-service check-in kiosks starting in 1997, and had more than any other airline. Northwest was also the first large U.S. airline to offer passengers internet check-in, with service from December 2000.

On April 14, 2008, Northwest Airlines announced that it would be merging with Delta Air Lines to form the world's largest airline. The merger was approved on October 29, 2008. The combined airline uses the Delta name and branding.