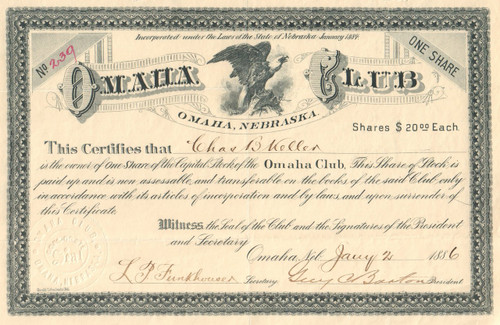 The Omaha Club was established in 1883 (incorporated 1884) and moved from one location to another during the first decade of its existence. Construction of Omaha Club building on the northwest corner of 20th and Douglas began in 1893 and was completed in January 1895. The building stood until 1965, when it was razed and replaced by a new structure at the same location. During the seventy years of its existence five presidents spent the night in the building: McKinley (during the Trans-Mississippi Exposition), the first Roosevelt, Taft, Coolidge, and Ford.

Erected in 1893, the building is Italian Renaissance in style and consists of three stories and a basement. It is constructed of light granite rock and buff brick, trimmed with terra cotta. The entrance is formed by an arcade of three arches, and over it, on the third floor, is a recessed balcony. The interior is distinguished by an air of quiet elegance rather than ornamental grandeur. Of special note is the mantel in the hall, finished in embossed tile, having carved seats on each side. Among furnishings considered heirlooms at the club are four quaint card tables, two escritoires, the original parlor set, a carved oak hat-rack, several paintings dating back to 1880, and engravings and tapestries donated by wealthy patrons of the club.

Warren Buffett has been one of the more famous members but not without controversy.  Mr. Buffett pressured the Omaha Club—an exclusive dining spot for local businessmen—to reverse its policy of not admitting Jews. He expressed his dismay to the club’s board, which responded that Jews “have their own club.” So Mr. Buffett applied for membership of the Highland Country Club, which was founded by Jewish golfers who had been subjected to anti-Semitic insults. In 1969, the Highland admitted him as a member. He then went back to the Omaha Club and told them that the Highland was no longer entirely Jewish. Mr. Lowenstein writes: “Now the Omaha Club had no excuse, and quickly admitted some Jews.