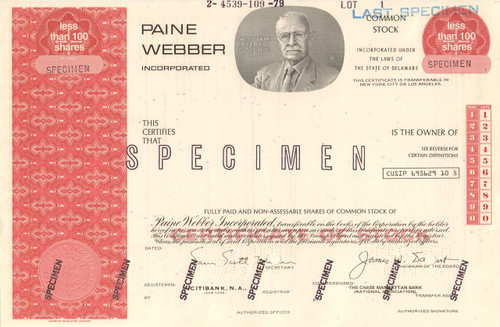 Very tough to find specimen certificate. This printer sample is marked "Last Specimen" in the upper right by the American banknote Company.  William Alfred Paine top center vignette makes this a great find for the collector.

PaineWebber & Co. was an American investment bank and stock brokerage firm that was acquired by the Swiss bank UBS in 2000. The company was founded in 1880 in Boston, Massachusetts, by William Alfred Paine and Wallace G. Webber. Operating with two employees, they leased premises at 48 Congress Street in May 1881. The company was renamed Paine, Webber & Co. when Charles Hamilton Paine became a partner. Members of the Boston Stock Exchange, in 1890 the company acquired a seat on the New York Stock Exchange. Wallace G. Webber retired after the business weathered a major financial crisis that hit the market in 1893.

In May 1881, William Alfred (W.A.) Paine and Wallace G. Webber founded Paine & Webber as a brokerage firm in Boston, Massachusetts with a seat on the Boston Stock Exchange. With the admission of Charles H. Paine to the partnership, the firm was renamed Paine, Webber & Co. The firm would purchase a seat on the New York Stock Exchange in 1890. Also in the 1890s, W.A. Paine entered into a partnership with Copper Range Company and Copper Range Railroad, controlled by John Stanton.

Controlled by the Paine family, Paine, Webber & Co. entered the investment banking business in the 1920s. After nearly fifty years at the head of the company, W.A. Paine died right before the Wall Street Crash of 1929. His son F. Ward Paine became head of the firm, a position he held until 1940. Following the difficult years of the Great Depression, Paine Webber merged with Jackson & Curtis, another Boston-based brokerage firm, in June 1942. In July 1879, Charles Cabot Jackson and Laurence Curtis had founded their brokerage firm Jackson & Curtis on Congress Street in Boston, Massachusetts not far from the original Paine Webber offices. The combined firm, Paine, Webber, Jackson & Curtis, operated a combined total of 22 branch offices. With its greater combined asset base, Paine Webber Jackson & Curtis had become a significant participant in the New England financial market.

On November 3, 2000, under the leadership of Chairman and CEO, Donald Marron, the company completed a US$10.8 billion cash and stock merger with UBS AG, a banking conglomerate headquartered in Zurich, Switzerland. The acquisition pushed UBS to the top wealth and asset management firm in the world. Initially the business was given the divisional name "UBS PaineWebber" but in 2003 the 123-year-old name Paine Webber disappeared when it was renamed "UBS Wealth Management USA".