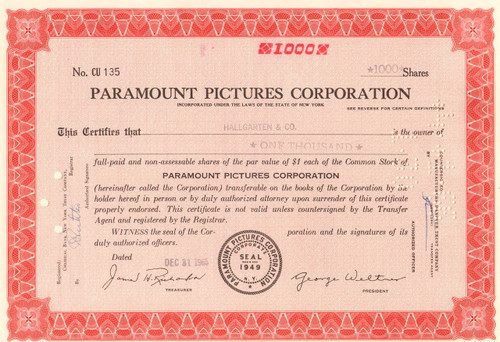 Uncommon movie studio piece that is a great find!  Great gift for the movie buff.  Perfect for framing in your home theater. Issued and cancelled.  Dated 1965.

Paramount is the fifth oldest surviving film studio in the world after the French studios Gaumont Film Company (1895) and Pathé (1896), followed by the Nordisk Film company (1906), and Universal Studios (1912). It is the last major film studio still headquartered in the Hollywood district of Los Angeles.

Paramount Pictures dates its existence from the 1912 founding date of the Famous Players Film Company. Founder Hungarian-born Adolph Zukor, who had been an early investor in nickelodeons, saw that movies appealed mainly to working-class immigrants. With partners Daniel Frohman and Charles Frohman he planned to offer feature-length films that would appeal to the middle class by featuring the leading theatrical players of the time (leading to the slogan "Famous Players in Famous Plays").

That same year, another aspiring producer, Jesse L. Lasky, opened his Lasky Feature Play Company with money borrowed from his brother-in-law, Samuel Goldfish, later known as Samuel Goldwyn. The Lasky company hired as their first employee a stage director with virtually no film experience, Cecil B. DeMille, who would find a suitable location site in Hollywood, near Los Angeles, for his first feature film, The Squaw Man.

In 1916, Zukor maneuvered a three-way merger of his Famous Players, the Lasky Company, and Paramount. Zukor and Lasky bought Hodkinson out of Paramount, and merged the three companies into one. The new company Lasky and Zukor founded, Famous Players-Lasky Corporation, grew quickly, with Lasky and his partners Goldwyn and DeMille running the production side, Hiram Abrams in charge of distribution, and Zukor making great plans..

Because Zukor believed in stars, he signed and developed many of the leading early stars, including Mary Pickford, Marguerite Clark, Pauline Frederick, Douglas Fairbanks, Gloria Swanson, Rudolph Valentino, and Wallace Reid. With so many important players, Paramount was able to introduce "block booking", which meant that an exhibitor who wanted a particular star's films had to buy a year's worth of other Paramount productions.

Eventually, Zukor shed most of his early partners; the Frohman brothers, Hodkinson and Goldwyn were out by 1917 while Lasky hung on until 1932, when, blamed for the near-collapse of Paramount in the Depression years, he too was tossed out.  A bank-mandated reorganization team, led by John Hertz and Otto Kahn kept the company intact, and, miraculously, Zukor was kept on. In 1935, Paramount-Publix went bankrupt. In 1936, Barney Balaban became president, and Zukor was bumped up to chairman of the board. In this role, Zukor reorganized the company as Paramount Pictures, Inc. and was able to successfully bring the studio out of bankruptcy.

Paramount cartoons produced by Fleischer Studios continued to be successful, with characters such as Betty Boop and Popeye the Sailor becoming widely successful. However, a huge blow to Fleischer Studios occurred in 1934, after the Production Code was enforced and Betty Boop's popularity declined as she was forced to have a more tame personality and wear a longer skirt. The animation studio would rebound with Popeye, and in 1935, polls showed that Popeye was even more popular than Mickey Mouse.   Fleischer Studios was acquired by Paramount, which renamed the operation Famous Studios.

By the mid-1950s, all the great names were gone; only C.B. DeMille, associated with Paramount since 1913, kept making pictures in the grand old style. Despite Paramount's losses, DeMille would, however, give the studio some relief and create his most successful film at Paramount, a 1956 remake of his 1923 film The Ten Commandments. DeMille died in 1959. Like some other studios, Paramount saw little value in its film library, and sold 764 of its pre-1948 films to MCA Inc. in February 1958.

Gulf + Western Industries also bought the neighboring Desilu television studio from Lucille Ball in 1967. Using some of Desilu's established shows such as Star Trek, Mission: Impossible, and Mannix as a foot in the door at the networks, the newly reincorporated Paramount Television eventually became known as a specialist in half-hour situation comedies. UPN would feature many of the shows it originally produced for other networks, and would take numerous gambles on series such as Star Trek: Voyager and Star Trek: Enterprise that would have otherwise either gone direct-to-cable or become first-run syndication to independent stations across the country.

Paramount's successful run of pictures extended into the 1980s and 1990s, generating hits like Airplane!, American Gigolo, Ordinary People, An Officer and a Gentleman, Flashdance, Terms of Endearment, Footloose, Pretty in Pink, Top Gun, "Crocodile" Dundee, Fatal Attraction, Ghost, the Friday the 13th slasher series, as well as Raiders of the Lost Ark and its sequels. Other examples are the Star Trek series and a string of films starring comedian Eddie Murphy like Trading Places, Coming to America, and Beverly Hills Cop and its sequels.  During this period, responsibility for running the studio passed from Eisner and Katzenberg to Frank Mancuso, Sr. (1984) and Ned Tanen (1984) to Stanley R. Jaffe (1991) and Sherry Lansing (1992).

Paramount is the last major film studio located in Hollywood proper. When Paramount moved to its present home in 1927, it was in the heart of the film community. Since then, former next-door neighbor RKO closed up shop in 1957; Warner Bros. moved to Burbank in 1930; Columbia joined Warners in Burbank in 1973 then moved again to Culver City in 1989; and the Pickford-Fairbanks-Goldwyn-United Artists lot, after a lively history, has been turned into a post-production and music-scoring facility for Warners, known simply as "The Lot". For a time the semi-industrial neighborhood around Paramount was in decline, but has now come back. The recently refurbished studio has come to symbolize Hollywood for many visitors, and its studio tour is a popular attraction.

During this time period, Paramount Pictures went under the guidance of Jonathan Dolgen, chairman and Sherry Lansing, president.[40][41] During their administration over Paramount, the studio had an extremely successful period of films with two of Paramount's ten highest grossing films being produced during this period.[42] The most successful of these films, Titanic, a joint production with 20th Century Fox, became the highest grossing film up to that time, grossing over $1.8 billion worldwide.[43] Also during this time, three Paramount Pictures films won the Academy Award for Best Picture; Titanic, Braveheart, and Forrest Gump.

Paramount's most important property, however, was Star Trek. Studio executives had begun to call it "the franchise" in the 1980s due to its reliable revenue, and other studios envied its "untouchable and unduplicatable" success. By 1998 Star Trek TV shows, movies, books, videotapes, and licensing provided so much of the studio's profit that "it is not possible to spend any reasonable amount of time at Paramount and not be aware of [its] presence"; filming for Star Trek: Voyager and Star Trek: Deep Space Nine required up to nine of the largest of the studio's 36 sound stages.

On December 11, 2005, The Paramount Motion Pictures Group announced that it had purchased DreamWorks SKG in a deal worth $1.6 billion. The agreement does not include DreamWorks Animation SKG Inc., the most profitable part of the company that went public the previous year. Under the deal, Paramount is required to distribute the DreamWorks animated films for a small fee intended only to cover Paramount's costs with no profit to the studio, including the Shrek franchise.

On October 6, 2008, DreamWorks executives announced that they were leaving Paramount and relaunching an independent DreamWorks. The DreamWorks trademarks remained with DreamWorks Animation when that company was spun off before the Paramount purchase, and DreamWorks animation transferred the license to the name to the new company.

In December 2013, The Walt Disney Studios purchased Paramount's remaining distribution and marketing rights to future Indiana Jones films, while Paramount will continue to distribute the first four films for Disney, and will receive "financial participation" from any additional films.