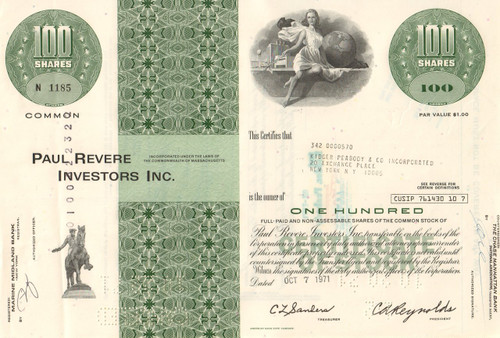 Great collectible stock cert with a double vignette - Paul Revere on his horse to the left, classical female figure with globe and modern city scene at the top. Issued and cancelled. Dated 1971.  Popular piece!

Issued by the Paul Revere Life Insurance Company as a closed end management investment company in 1971. The company was based out of Worcester MA and acquired by the Unum Corporation in 1997.

The corporation traces its history to the 1895 establishment of the Masonic Protective Association (MPA) in Worcester, Massachusetts. This fraternal accident, disability, and life insurance company was formed by James E. Farwell, Frank M. Heath, and Francis A. Harrington, who was named president. Groups like the secretive Freemasons proved vital to the insurance industry in these early years, helping to diffuse the hardships associated with loss. The MPA operated as a mutual cooperative owned by the policy holding members and was exempt from state insurance legislation due to its fraternal affiliation.

In 1909, however, mounting suspicion of such groups' business dealings spawned legislation that discouraged fraternal insurance organizations in Massachusetts. Thus, MPA reincorporated as a stock company owned by shareholders, all of whom, not coincidentally, were Freemasons. In 1918, Francis Harrington and his family won exclusive ownership of the MPA in what the company called a landmark legal case.

The founder controlled the MPA for four more years, until his death, when son Charles Harrington succeeded him; the Harrington family would continue to lead the company for the next 50 years. In spite of its corporate reorganization and a 1922 name change to the more generic Massachusetts Protective Association, the MPA continued to sell policies exclusively to Masons until the formation of Paul Revere in 1930.