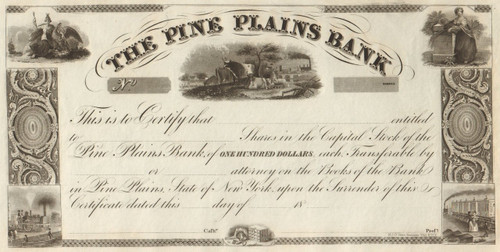 Stunning banking piece. Multiple vignettes with train scenes at the lower left and right, older Lady Liberty Warrior at the upper left, classical female figure at the upper right, and farm scene with cattle at the top. Unissued and not cancelled circa 1839 from issued examples.

The Pine Plains Bank was organized in 1839, The first meeting for the organization was held at the hotel of Henry C. Myers (now Stissing House), at which seventeen directors were named. Committees were selected to draft Articles of Association and to find a site for the banking house. The bank had a capital of one hundred thousand dollars, divided into one thousand shares of one hundred dollars each. The bank closed its doors in 1857, voluntarily, but maintained its good name. The following year the Citizens' Bank was organized, and in 1865 it was changed to a National Bank.  Its capital stock is $45,000.

The town of Pine Plains is one of the northern tier of towns in Dutchess, bordering the county of Columbia. Extensive plains originally covered by pine forests gave the town its name. Among the early settlers are the names familiar at the present time—Winans, Smith, Harris, Reynolds, Hoffman, Pulver, Deuel, Dibblee, Husted, Stevenson, Rau (Rowe), Seldon, and others. The eastern portion of Pine Plains was settled by the Palatines.

The village of Pine Plains had an official name as a post office a few years prior to its organization as a town. In 1830 a direct stage route twice a week was established from Poughkeepsie to Pine Plains, by way of Pleasant Valley. Since the construction of the Newburgh, Dutchess & Connecticut Railroad, in 1869, the mail has been carried by steam.