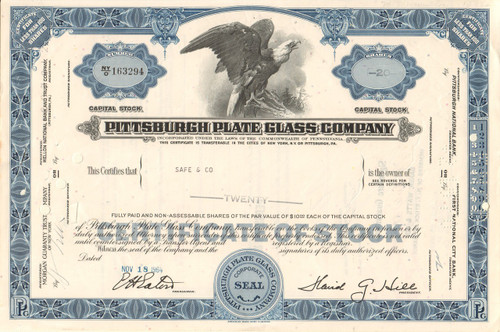 Great corporate name.  Very nice vignette of an American eagle with wings spread perched on a rock with trees in the background. Issued and cancelled. Dated in the 1960's.

PPG expanded quickly. By 1900, known as the "Glass Trust", it included 10 plants, had a 65 percent share of the U.S. plate glass market, and had become the nation's second largest producer of paint. Today, known as PPG Industries, the company is a multi-billion dollar, Fortune 500 corporation with 150 manufacturing locations around the world. It now produces coatings, glass, fiberglass, and chemicals.

On 19 December 1968 the company changed its name to PPG Industries, Inc., to show its diverse offerings. Ditzler Color Company, established in 1902 in Detroit as an automotive color concern, was purchased by Pittsburgh Plate Glass Company (now PPG) in 1928. In the mid-1980s, Cipisa, a Spanish paint company was acquired and renamed PPG Ibérica. The CEO of Cipisa, Pere Nadal Carres became CEO of PPG Ibérica. In 1990 PPG founded Transitions Optical as a joint venture with Essilor.

In 2007, the company was involved in a lawsuit on failing to disclose a purchase reduction of its two major auto glass customers. On 2 January 2008, PPG acquired the SigmaKalon Group of companies for $3.2 billion from private investment firm Bain Capital, strongly increasing its paint and specialty coatings business. In April 2013, PPG completed the acquisition of AkzoNobel North American architectural coatings business including Glidden, Liquid Nails, and Flood brands.