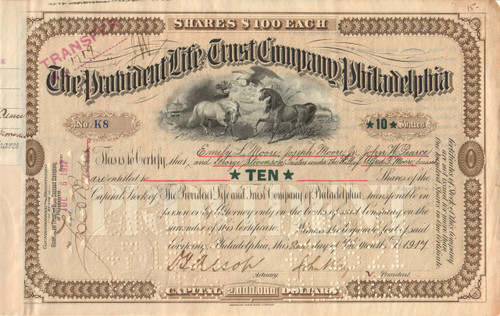 Awesome CA winery stock.  Wonderful vignette of eagle and horses with backgrounds of a sailing ship,a steamship, and a country house scene.  Issued and cancelled. Stub glued to the left border when redeemed. Dated 1914.

A bank and insurance company founded in 1865 by members of the Society of Friends (Quakers), the Provident's L-shaped building had entrances at 407-09 Chestnut Street and 42 South 4th Street.

The bank at 407-09 Chestnut Street was to be part of Philadelphia's "Banker's Row", and the challenge was to distinguish it from the established Italianate buildings. Furness won the Provident commission in a national design competition in 1876, besting his former partner George Hewitt. His forceful Modern Gothic facade demanded attention, its projecting bay and tower balanced on compressed columns, themselves supported by corbels (brackets) jutting out from the building. The whole was a study in tension and compressed energy, heavy, but not looming.

The interior was one enormous room, its 4-story walls and floor covered with multi-colored Minton tiles, an arched iron truss at mid-building decorated with machine-inspired cutouts, and skylights supported by iron trusses with similar cutouts. The front half was lit by the great Gothic window of the facade's projecting bay and a large skylight; the rear half, by another skylight and clerestory windows facing north. Rear windows from the insurance company on 4th Street opened into the tall light-filled banking room. The effect was more church-like than secular—a shrine to commerce—with a severity and logic that presaged the Chicago School of early-20th century modernism.

Across Chestnut Street from the Furness bank was the Second Bank of the United States (1819–24), a white-marble, Greek Revival temple by William Strickland. Planning for what is now Independence National Historical Park (INHP) began in the late-1940s, and Strickland's bank was to become an art museum housing portraits of the Founding Fathers. On the block opposite Furness's bank, every building except the Second Bank was demolished for the national park, and a re-creation of William Thornton's Library Company of Philadelphia (1790) was erected. The sedate Italianate buildings of Banker's Row were considered harmonious with the Second Bank and the re-created Library Hall; the Provident was considered jarring.

Through the 1950s, architectural historians worked to save Furness's bank, writing articles for major publications, photographing and documenting it. Charles E. Peterson, the National Park Service architect assigned to INHP, edited a column in the Journal of the Society of Architectural Historians and used it to call attention to the Provident. But, in the end, the Colonial Revivalists remained unswayed, and Furness's bank was demolished beginning in 1959. Samples of the Minton tiles and other architectural elements are preserved in the architecture study collection at INHP.