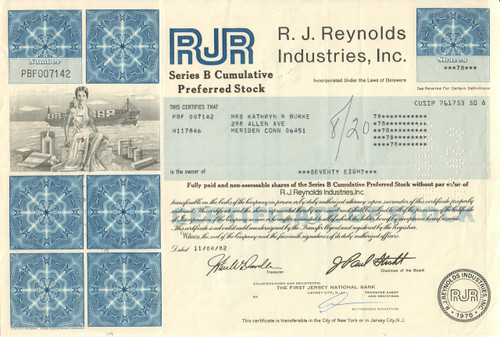 Nice tobacco collectible.  Unusual side vignette of a classical female figure seated at a dock with company products and freighter ship in the background. Series B Cumulative Preferred stock.  Issued and cancelled. Dated early 1980's.

The R.J. Reynolds Tobacco Company (RJR), based in Winston-Salem, North Carolina and founded by R. J. Reynolds in 1875, is the second-largest tobacco company in the U.S. (behind Altria). RJR is an indirect wholly owned subsidiary of Reynolds American Inc. which in turn is 42% owned by British American Tobacco of the United Kingdom.

The son of a tobacco farmer in Virginia, R. J. Reynolds sold his shares of his father's company in Patrick County, Virginia, and ventured to the nearest town with a railroad connection, Winston-Salem, to start his own tobacco company. He bought his first factory building from the Moravian Church and established the "little red factory" with seasonal workers. The first year, he produced 150,000 pounds of tobacco; by the 1890s, production had increased to several million pounds a year. The company's factory buildings were the largest buildings in Winston-Salem, with new technologies such as steam power and electric lights. The second primary factory building, built in 1892, is the oldest Reynolds factory still standing and was sold to Forsyth County in 1990.

At the beginning of the 1900s, Reynolds bought most of the competing tobacco factories in Winston-Salem. The company produced 25% of America's chewing tobacco. 1907's Prince Albert smoking tobacco became the company's national showcase product, which led to high-profile advertising in New York City's Union Square. The Camel cigarette became the most popular cigarette in the country. The Reynolds company imported so much French cigarette paper and Turkish tobacco for Camel cigarettes that Winston-Salem was designated by the United States federal government as an official port of entry for the United States, despite the city being 200 miles inland. Winston-Salem was the eighth-largest port of entry in the United States by 1916. In 1917, the company bought 84 acres of property in Winston-Salem and built 180 houses that it sold at cost to workers, to form a development called "Reynoldstown."

At the time Reynolds died in 1918 (of pancreatic cancer), his company owned 121 buildings in Winston-Salem. He was so integral to company operations that executives did not hang another chief executive's portrait next to Reynolds' in the company board room until 41 years later Reynolds' brother William Neal Reynolds took over following Reynolds' death, and six years later Bowman Gray became the chief executive. By that time, Reynolds Co. was the top taxpayer in the state of North Carolina, paying $1 out of every $2.50 paid in income taxes in the state, and was one of the most profitable corporations in the world. It made two-thirds of the cigarettes in the state.

Reynolds Co.'s success during this period can also be measured by the concurrent success of many Winston-Salem companies which received large amounts of business from Reynolds: Wachovia National Bank became one of the largest banks in the Southeast, and the company's law firm Womble Carlyle Sandridge & Rice became the largest law firm in North Carolina. R.J. Reynolds Tobacco diversified into other areas, buying Pacific Hawaiian Products, the makers of Hawaiian Punch, in 1962, Sea-Land Service in 1969, and Del Monte Foods in 1979. Sea-Land was spun off in 1984.  Because of the company's diversification, the company changed its name to R.J. Reynolds Industries, Inc. in 1970. R.J. Reynolds Tobacco Co. was a subsidiary.

R.J. Reynolds Industries merged with Nabisco Brands in 1985, and the name changed to RJR Nabisco in August 1986. In 1987, a bidding war ensued between several financial firms to acquire RJR Nabisco. Finally, the private equity takeover firm Kohlberg Kravis and Roberts & Co (commonly referred to as KKR) was responsible for the 1988 leveraged buyout of RJR Nabisco. This was documented in several articles in The Wall Street Journal by Bryan Burrough and John Helyar. These articles were later used as the basis of a bestselling book, Barbarians at the Gate: The Fall of RJR Nabisco, and then into a television movie.

As a result, in February 1989, RJR Nabisco paid executive F. Ross Johnson US$53,800,000 as part of a golden handshake clause, the largest such deal in history at the time, as severance compensation for his acceptance of the KKR takeover. He used the money to open his own investment firm, RJM Group, Inc. In 1999 RJR Nabisco spun off R.J. Reynolds Tobacco, which began trading on June 15 as R.J. Reynolds Tobacco Holdings, Inc., and a year later announced it would buy Nabisco Group Holdings Inc., the company that had been RJR Nabisco. This followed the sale of Nabisco Holdings Group to Philip Morris.

In 1999, R.J. Reynolds was spun out of RJR Nabisco. The same year, the company sold all its non-US operations to Japan Tobacco, which made those operations into its international arm, JT International. Consequently, any Camels, Winstons or Salems sold outside the US are now actually Japanese cigarettes. On July 30, 2004, R.J. Reynolds merged with the U.S. operations of British American Tobacco (operating under the name of Brown & Williamson). A new parent holding company, Reynolds American Inc., was established as part of the transaction. On July 15, 2014, Reynolds American agreed to buy Lorillard Tobacco Company for $27.4 billion. The deal also included the sale of the Kool, Winston, Salem, and blu brands to Imperial Tobacco for $7.1 billion