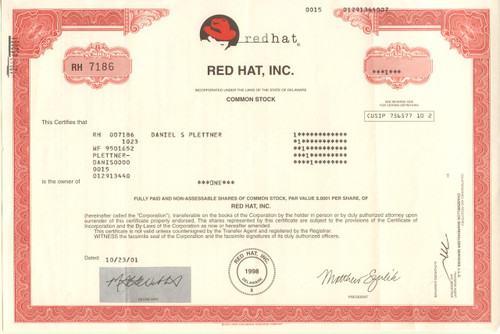 Cool software company with a great vignette of the company logo.  Issued and not cancelled. Dated 2001.

Red Hat creates, maintains, and contributes to many free software projects. It has acquired several proprietary software product codebases through corporate mergers and acquisitions and has released such software under open source licenses. As of June 2013, Red Hat is the largest corporate contributor to Linux.

In 1993 Bob Young incorporated the ACC Corporation, a catalog business that sold Linux and Unix software accessories. In 1994 Marc Ewing created his own Linux distribution, which he named Red Hat Linux. Young bought Ewing's business in 1995, and the two merged to become Red Hat Software, with Young serving as chief executive officer.

Red Hat went public on August 11, 1999, achieving the eighth-biggest first-day gain in the history of Wall Street. Matthew Szulik succeeded Bob Young as CEO in December of that year. Bob Young went on to found the online print on demand and self-publishing company, Lulu in 2002. Before its IPO, Red Hat had received some funding from Joyce Young, the aunt of founder Bob Young. When Red Hat went public, she cashed in enough stock to recoup her initial investment, then left the remaining stock to linger, "for fun". Her return on investment was so great that, by January 2000 she was a millionaire.

Red Hat moved its headquarters from Durham to North Carolina State University's Centennial Campus in Raleigh, North Carolina in February 2002. In December 2005 CIO Insight magazine conducted its annual "Vendor Value Survey", in which Red Hat ranked #1 in value for the second year in a row.Red Hat stock became part of the NASDAQ-100 on December 19, 2005.

Red Hat acquired open-source middleware provider JBoss on June 5, 2006, and JBoss became a division of Red Hat. On September 18, 2006, Red Hat released the Red Hat Application Stack, which integrated the JBoss technology and which was certified by other well-known software vendors. On December 12, 2006, Red Hat stock moved from trading on NASDAQ (RHAT) to the New York Stock Exchange (RHT). In 2007 Red Hat acquired MetaMatrix and made an agreement with Exadel to distribute its software.