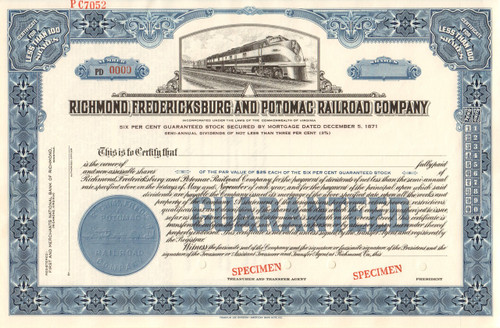 The Richmond, Fredericksburg, and Potomac Railroad (RFP) was a railroad connecting Richmond, Virginia, to Washington, D.C. It is now a portion of the CSX Transportation system. The RF&P was a bridge line, with a slogan of "Linking North & South," on a system that stretched about 113 miles. Until around 1965 RF&P originated less than 5% of its freight tonnage, probably less than any other Class I railroad. For much of its existence the RF&P connected with the Chesapeake and Ohio Railway, the Atlantic Coast Line Railroad and Seaboard Air Line Railroad at Richmond. At Alexandria and through trackage rights to Union Station in Washington, D.C., connections were made with the Pennsylvania Railroad, Baltimore and Ohio Railroad and the Southern Railway. It connected to the Washington and Old Dominion Railroad at Potomac Yard and interchanged with the Chesapeake and Ohio Railway at Doswell. It and the former Conrail properties are the only CSX lines to have cab signal requirements on their entire system.

Badly damaged during the Civil War, on October 11, 1870 an extension to the north toward Quantico was authorized at a Special meeting of the company's stockholders. The company's charter limited this branch to 10 miles, leaving it 1.7 miles short of the Alexandria and Fredericksburg Railroad. This split from the existing line at Brooke and ran north to Quantico, also on the Potomac. The old line to the Aquia Creek wharf was abandoned on the opening of the Quantico wharf on May 1, 1872.

On the other end of the line the Alexandria and Washington Railroad was chartered on February 27, 1854 to build from the south end of the Long Bridge over the Potomac River south to Alexandria. That line opened in 1857. The railroad went bankrupt and was sold July 9, 1887, being reorganized November 23, 1887, as the Alexandria and Washington Railway. In 1873 the Baltimore and Potomac Railroad's branch over the Long Bridge opened, giving a route into Washington, D.C., over which the A&W obtained trackage rights.

The Richmond-Washington Company was incorporated September 5, 1901 as a holding company, owning the entire capital stock of the two railroads. The stock of the company was owned equally by the Pennsylvania Railroad, Baltimore and Ohio Railroad, Atlantic Coast Line Railroad, Southern Railway, Seaboard Air Line Railway and Chesapeake and Ohio Railway. Four of these companies (B&O, ACL, SAL, C&O) have since become part of CSX. The Southern Railway is now part of Norfolk Southern and does not use the former RF&P; the former Pennsylvania Railroad, in its later incarnation as Conrail, has been split between CSX and Norfolk Southern with most of PRR's routes becoming part of Norfolk Southern. However, the portion of the former PRR that connected to the very north of the RF&P's former Potomac Yard, across the Long Bridge and into Washington DC, became part of CSX following the takeover of Conrail by NS and CSX.

From 1902 to 1908, major sections of the main line totaling 21 miles were relocated. On 31 Dec 1925 RF&P operated 118 miles of road and 432 miles of track; on 31 Dec 1970 mileages were 118 and 518. As the link between "North and South" the RF&P primarily hosted the trains of other railroads, particularly those on the lucrative New York–Florida run. In March 1950 this included the East Coast Champion, West Coast Champion, Miamian, Palmland, Silver Star, Silver Comet, Orange Blossom Special, Silver Meteor, Vacationer, Havana Special, Palmetto, Florida Special, Cotton Blossom, Sunland, and Everglades.

The RF&P operated comparatively few trains of its own. One was the Old Dominion, a streamliner inaugurated in 1947 between Washington and Richmond. This train used four 70-seat coaches and a cafe-parlor car, all built by American Car and Foundry.

The Richmond, Fredericksburg and Potomac and Richmond and Petersburg Railroad Connection was chartered March 3, 1866, and opened May 1, 1867, as a connection between the RF&P and the Richmond and Petersburg Railroad (later part of the Atlantic Coast Line Railroad) west of downtown Richmond. It was operated jointly by those two companies. In addition, a downtown connection was owned by the R&P past Broad Street Station.

The Louisa Railroad was chartered in 1836, running from the RF&P at Doswell west to Louisa. At first it was operated as a branch of the RF&P, but it was reorganized as the Virginia Central Railroad in 1850 and merged into the Chesapeake and Ohio Railroad in 1868 as its oldest predecessor.

The short branch from the north end to Rosslyn opened in 1896, and was sold to the Rosslyn Connecting Railroad in 1903, which was controlled by the Philadelphia, Baltimore and Washington Railroad.