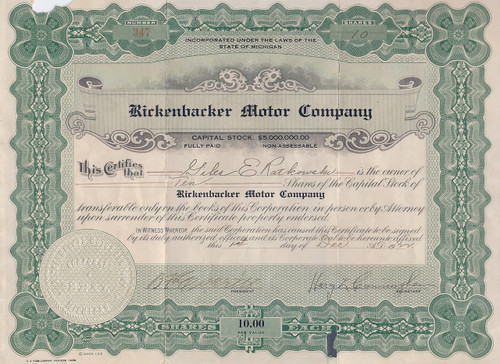 The company was established by Eddie Rickenbacker, America's leading fighter ace during World War I. He used his World War I 94th Fighter Squadron emblem depicting a top hat inside a ring. The emblems were located both on the front and the back of the cars. Rickenbacker Motor Company made sporting coupes, touring cars, sedans, and roadsters. Four wheel inside brakes were introduced in 1923. Rickenbacker made an unsuccessful attempt to merge with Peerless around 1924.

Early six-cylinder engines were joined in 1925 by an eight-cylinder engine. The model was named Vertical Eight Super Fine which referred to the advanced proprietary engine and the high quality of the cars. Although 1927 saw new models signed 6-70, 8-80 and 8-90, Rickenbacker cars were too expensive for the time and sales were poor. Before the company closed down in 1927, more than 35,000 cars had been built.

The manufacturing equipment were sold to Audi and transported to Germany, somewhat ironic since Rickenbacker renounced his supposed German heritage (he was actually of Swiss ancestry) in light of World War I. This transaction was reflected in Audi Zwickau and Dresden models, using six- or eight-cylinder Rickenbacker engines.

Edward Vernon Rickenbacker (October 8, 1890 – July 23, 1973) was an American fighter ace in World War I and Medal of Honor recipient. With 26 aerial victories, he was America's most successful fighter ace in the war. He was also a race car driver and automotive designer, a government consultant in military matters and a pioneer in air transportation, particularly as the longtime head of Eastern Air Lines.

Edward Rickenbacher was born in Columbus, Ohio, to Swiss German-speaking immigrants. From childhood, he loved machines and experimented with them, encouraged by his father's words: "A machine has to have a purpose". In what was to become one of the defining characteristics of Rickenbacker's life, he nearly died many times in events ranging from an early run-in with a horse-drawn carriage, to a botched tonsillectomy, to airplane crashes.