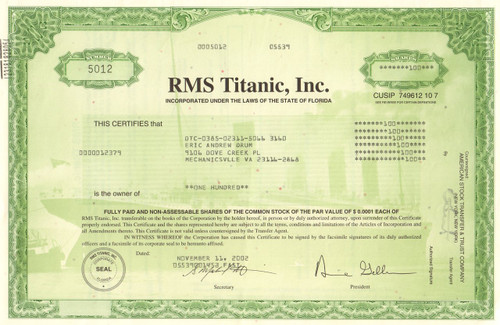 Premier Exhibitions Inc is an Atlanta, Georgia-based company that organizes traveling exhibitions. Its two most prominent exhibits are artifacts from the RMS Titanic (for which it is the sole legal guardian of the artifacts) and BODIES - The Exhibition in which it displays cadavers arranged in lifelike poses via plastination from the Dalian Medical University in China. It has multiple exhibits of both bodies and Titanic running at the same time in different venues. In 2008 it entered into a 10-year lease for more than 36,000 square feet at the Luxor Las Vegas for exhibits of Titanic and bodies there.

The company has its roots in the Florida-based RMS Titanic Inc. founded in 1987 by G. Michael Harris Florida Native and Founder of Oceanic Research and Exploration and Titanic Ventures Limited Partnership, George Tulloch. These co-partners led a $6 million expedition to the ship, and recovered artifacts from the ocean floor. In order to recover these artifacts, G. Michael Harris, George Tulloch and his team completed 32 dives to Titanic in the “Nautile”, a deep-diving submersible chartered by Oceanic Research and Exploration in a partnership with Ifremer, the French Research Institute for Exploration of the Sea. This is the greatest number of deep-sea dives ever completed for any televised project.The company had an OTC ticker symbol of SOST. In 1994 it won a Virginia court order to get salvor-in-possession rights to the ship.

Tulloch and G. Michael Harris were chosen to partner with Ifremer. In 1992, the company, through a reverse merger, formed into RMS Titanic Inc. Tulloch conducted operations on the Titanic in 1993, 1994, 1996, and 1998. G. Michael Harris until recently owned and operated the largest Titanic Exhibition in the world, located in Orlando, Florida. Mr. Harris in 1999 also designed and created all Titanic exhibitions owned by RMS Titanic, Inc. on World Tour. Mr. Harris is also the Expedition Leader with over 90 hours on the wreck of the RMS Titanic in the Russian Deep Diving Submersiable MIR1 & MIR2. John Joslyn operates the Titanic Museum Attractions in Pigeon Forge, Tennessee. and Branson, Missouri in the United States. The television documentary “Return to the Titanic….LIVE”, hosted by Telly Savalas, was shown in 27 countries in 1987. A feature was the supposed live opening of the assistant purser's safe on television.

RMS Titanic and Premier continue to be involved in litigation over the matter. In 1999 founder Arnie Geller, John Joslyn, G. Michael Harris, and music promoter Joseph B. Marsh (who handled tours for Janet Jackson, David Copperfield, and Fleetwood Mac) led a takeover and ousting of Tulloch. Arnie Geller was installed as President and CEO of the company and G. Michael Harris was installed as Chief Operating Officer as well as Secretary of the Corporation RMS Titanic, Inc. G. Michael Harris and Arnold Geller fired all officers and Directors for misappropriation of Company assets and were the only two remaining Directors of the Company.