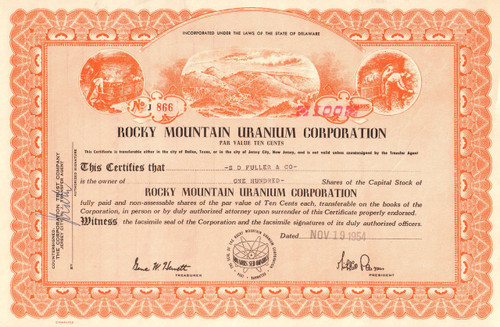 Incorporated 1954, the Rocky Mountain Uranium Corporation had operations and claims in Emory and Garfiled Counties of Utah. Mines included the Delta and the Hidden Spendor.

Critchell Parsons was the principal promoter of Rocky Mountain Uranium Corporation.  The stock was transferred under an agreement that the shareholders would make no sales without Parsons' approval. This restriction was to permit Parsons to prevent depressing the price by overselling the market. During 1954 Mailloux sold 23,650 shares and Foley sold 24,375 shares. These sales were made at various prices which averaged something over a dollar a share.

In the latter part of 1954, some transactions and adjustments between Parsons and the shareholders were made which resulted in his obtaining and retaining some of their stock certificates. Before the end of the year Parsons and the shareholders had a disagreement which arose from the failure to procure approval from the Securities and Exchange Commission and the Texas Securities Commission of a public offering of the stock. Parsons directed the transfer agent not to make transfers of the shareholders' certificates. They sued to establish their ownership. The litigation was compromised and settled in 1956. The shareholders sold a part of their remaining stock in 1956 for ten cents a share and the rest in 1957 for five cents a share.