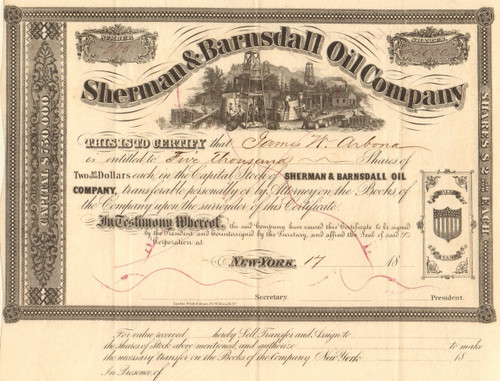 Great vignette of a very early oil drilling scene  This piece was apparently drawn in error (uncommon) as it was cancelled before completed with date and signatures.  Unissued  and cancelled. Circa 1865 based on issued examples. Perfect piece for framing.

In 1862, the Barnsdall well was struck and flowed 100 barrels per day. Barnsdall and Atkinson owned one third of the land interest and all of the working interest. Having thus begun in 1862, the development of their own leases, they followed it up in 1863 with a well on the Fleming farm which flowed 300 barrels per day from commencement. On the very day of the Fleming well, Atkinson completed a 50 barrel pumping well on the bluff in the rear of the Sherman well.  In 1865, the Sherman-Barnsdall Oil company was formed to consolidate interests of the wells around Titusville PA. The company was incorporated in New York for investors.