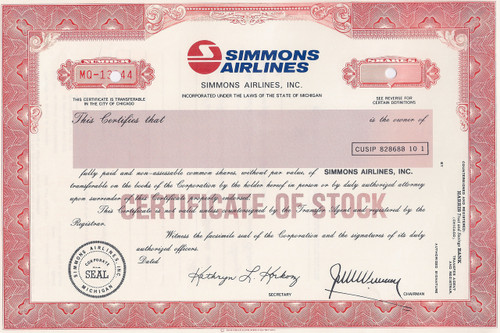 Simmons Airlines was a United States airline. It was the predecessor to American Eagle Airlines. Its headquarters were originally near Marquette, Michigan and were eventually moved to Chicago.

Simmons Airlines, Inc. began operations in 1978 between Marquette and Lansing using a Piper Navajo. Operations expanded in the 1980s to link multiple points in Michigan to Chicago and Detroit, and its fleet expanded with Embraer EMB 110 Bandeirante, Shorts 360s, and YS-11s. It began operating as a Republic Express branded carrier on April 28, 1985 serving markets from Detroit, and as an American Eagle branded carrier on October 1, 1985 serving markets from Chicago.

Simmons was acquired by AMR Corp. on August 1, 1987 and ended Northwest Airlink flights soon after. On May 28, 1993, it acquired certain assets of the holdings of Metro Airlines. Metro Airlines and its holdings Metro Airlines Leasing dba Metroflight, operated American Eagle flights from Dallas-Fort Worth International Airport and had recently acquired Chaparral Airlines just prior the asset acquisition by AMR Simmons.

In 1998 the remaining certificated regional airline carriers Wings West Airlines and Flagship Airlines, which were both wholly owned by the AMR Corporation and operating under the American Eagle banner and brand, were merged under the surviving Simmons Airlines IATA designator 'MQ', thus forming a certificated airline named American Eagle Airlines (rather than just an Airlink, Connect, Connection, Eagle, or Express airline code share brand).