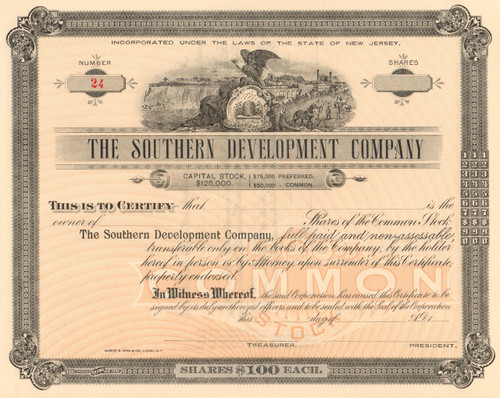 Very nice vignette of two an eagle perched above a beehive picture, background scenes include a waterfall and an early industrial town. Unissued and not cancelled. Circa 1875 from company records.

The Southern Development Company was set up by Collis P Huntington to control and develop land near his railroads as well as provide infrastructure and supplies to the comapnies. The company focused on bulk storage facilities, terminals, and a tie and timber plant.

Beginning in 1865, Huntington was involved in the establishment of the Southern Pacific Railroad with the Big Four principals of the Central Pacific Railroad. The railroad's first locomotive, C. P. Huntington, was named in his honor. With rail lines from New Orleans to the Southwest and into California, Southern Pacific grew to more than 9,000 miles of track. It also controlled 5,000 miles of connecting steamship lines. Using the Southern Pacific Railroad, Huntington endeavored to prevent the port at San Pedro from becoming the main Port of Los Angeles in the Free Harbor Fight. This division had its own management, utilized different construction procedures, and relied on different sources of supply.