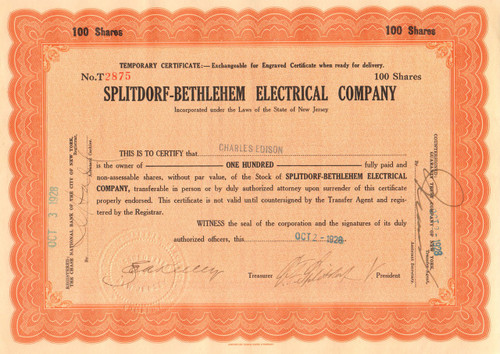 Charles Edison (August 3, 1890 – July 31, 1969) was a son of Thomas Edison and Mina Miller. He was a businessman, who became Assistant and then United States Secretary of the Navy, and served as the 42nd Governor of New Jersey. He married Carolyn Hawkins on March 27, 1918. They had no children. For a number of years Charles Edison ran Edison Records. Charles became president of his father's company Thomas A. Edison, Inc. in 1927, and ran it until it was sold in 1957, when it merged with the McGraw Electric Company to form the McGraw-Edison Electric Company. Edison was board chairman of the merged company until he retired in 1961.

Between 1951 and 1969, he lived in the Waldorf-Astoria Hotel, where he struck up a friendship with Herbert Hoover, who also lived there In 1962, Edison was one of the founders of the Conservative Party of New York State. In 1967, Edison hosted a meeting at the Waldorf-Astoria in New York that led to the founding of the Charles Edison Youth Fund, later the Charles Edison Memorial Youth Fund. Attending the meeting were Rep. Walter Judd (R-MN), author William F. Buckley, organizer David R. Jones, and Edison's political advisor Marvin Liebman. The name of the organization was changed in 1985 to The Fund for American Studies, in keeping with Edison's request to drop his name after 20 years of use. His personal mascot was the owl, and he collected objects depicting owls. Charles Edison died on July 31, 1969 in New York City. He is buried in Rosedale Cemetery in Orange, New Jersey.

The Splitdorf Company made radios, magnetos, lighting systems, spark plugs and other electrical products. They had manufacturing operations in Newark N.J. and in Canada and produced radios throughout the 1920's. The company merged with the Thomas Edison Company in early 1930's. In addition, the Splitdorf Electrical Co. of Newark, New Jersey manufactured at least 12 different motorcycle generators from 1918 to 1931.

The Edison Company purchased the Splitdorf Radio Company on January 14, 1929, and Charles Edison was elected president.  This was a way to get a leg up on the design of their first radio line and secure RCA and Hazeltine patent licenses. The patents were needed in order to legally manufacture and sell competitive radios at that time. The first line of Edison neutrodyne radios was introduced around March 1929.  The name of the Phonograph Division was changed to the Radio-Phonograph Division in May 1929, with the national introduction of the line at the 1929 RMA Radio Show and Convention.  The Company was renamed "Edison Radio."