State of New York Payment of Bounties to Volunteers bond 1865 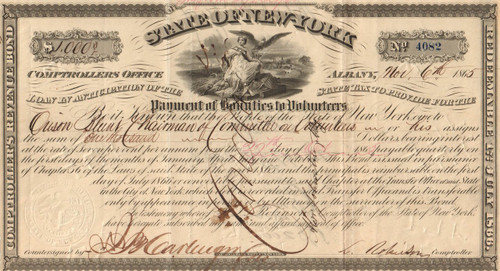 State of New York Payment of Bounties to Volunteers bond 1865

Rare NY Civil War collectible with a great engraved vignette of a seated classical female with eagle in front of countryside scenes.  Issued  and cancelled. Dated 1865.

The Bounty System,  in U.S. history, program of cash bonuses paid to entice enlistees into the army; the system was much abused, particularly during the Civil War, and was outlawed in the Selective Service Act of 1917. During the French and Indian Wars, the Revolutionary War, the War of 1812, and the Mexican War, military bounties included land grants as well as cash payments. Most Civil War bounties were in cash only.

From 1861 to 1865 the federal government, along with states and localities, paid about $750,000,000 in recruitment bounties. Congress authorized a $100 bounty in July 1861 to men enlisting for three years. With the passage of the Enrollment Act (March 3, 1863), three-year enlistees received $300 and five-year recruits got $400, but these sums were divided up and paid in monthly installments with the soldiers’ regular compensation. The states and localities offered higher bonuses. Since the federal draft applied only to congressional districts unable to meet their manpower quotas, wealthy districts would often pay in excess of $1,000 to volunteers from poorer districts in order to entice these men to enlist. The poorer districts were thus inequitably affected by the draft because their volunteers were not counted toward their quotas.

Bounty-jumping , the widespread practice of enlisting, collecting the bonus, deserting, reenlisting, collecting another bonus, etc., was an inherent defect in the system. Many bounty brokers recruited men and pocketed a sizable portion of the bonus, or they passed off derelicts as able-bodied men to the recruiting sergeants, receiving their money before the derelicts were discovered and discharged.