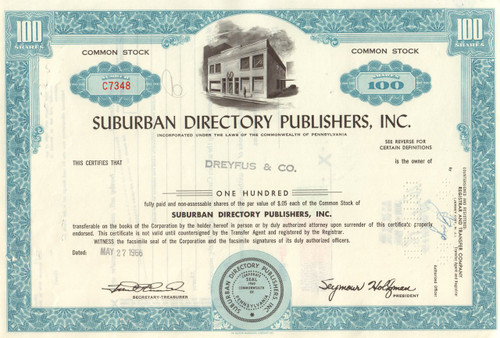 Interesting piece representing an obsolete medium.  This cert has a nice vignette of the company's operating offices.  Issued and cancelled. Dated in the 1960's.

The city directory was a book published by a private company that is similar to a phone book. In fact, since the telephone was invented in 1876, it predates the existence of the phone book by many years. The earliest city directory was published in 1855, and it is a small alphabetical listing of the residents of an area. Right from the beginning the directory listed the resident's name, address, and occupation.

In the early years of publication, the directories included a wife's name in parentheses after her husband's entry. It was not until the late 1950's that a third section was added so that someone could be looked up by their phone number as well as their address or name. Data was gathered for the city directory by sending individuals to each residence in the city; if no one was home to answer questions, a card was placed at the residence to be filled out and mailed back.

Suburban directories were extension of this publication.  There were many publishers throughout various regions of the country; this listing's company was based in the Philadelphia area.