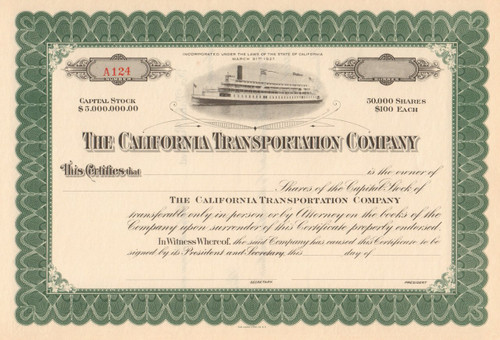 Very nice stock certificate with a ferry vignette, unissued and not cancelled. Crisp and clean, Circa 1927 for the capital efforts of building new ships..

Several different transportation companies formed over the years and operated steamboats. Among the earliest operators were Capt. Nels Anderson and Andrew Nelson, who transported freight up to Sacramento during the Gold Rush years.In 1875, they formed a new company, the California Transportation Company. Capt. Anderson’s son, Alfred E. Anderson eventually took the company over and expanded its service ports to include San Francisco, Sacramento and Stockton

By the 1880s, railroads began to have an impact on freight transportation on the water. The advent of the automobile in the early 20th century further threatened the steamboat business. Although surely aware of these odds, Alfred E. Anderson pursued his idea of building two of the finest and largest riverboats to operate an overnight service between San Francisco and Sacramento. They would replace earlier, smaller vessels.

The California Transportation Company had advertised its route for years as the Delta Route. The two new steamers received the names Delta King and Delta Queen respectively. The Delta King was launched in Stockton on May 9, 1925, the Delta Queen followed on December 12, 1925. It took another year and a half before both were completely fitted out for their maiden voyage. The cost was astronomical, with $1,000,000 spent for each boat.Both were put into service in 1927.

For the next 13 years, until September 1940, both boats made the trips between the two ports every night without fail. The depression and its aftermath struck the California Transportation Company hard. They went bankrupt in late 1935. The company reorganized and the boats resumed their schedule after a nine-month layoff. The opening of the Golden Gate Bridge and the Oakland Bridge further cut down into their business.

Both boats were chartered by the Navy in September 1940 and served to ferry troops across the San Francisco Bay, often transporting nearly 3,000 passengers at a time. After the war, both ships became part of the Suisun Bay mothball fleet in the summer of 1946. The ships were auctioned off to private companies by the end of that year. The Delta Queen moved on to navigate the Mississippi.

The Delta King was sold to a company in Canada. After many tribulations, the boat was brought back to California in 1959 and, after some strange twistss, such as being sunk, pirated, and finally seized by the U.S. government, came home to Sacramento. Today, the restored boat can be visited docked at the Old Sacramento waterfront.