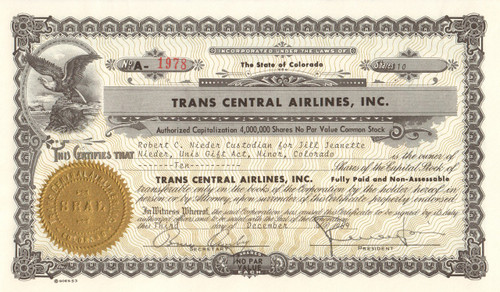 Very nice vignette of an early eagle perched on a rock in front of a coastal scene. Smaller certificate measuring  6" by 10". Issued and not cancelled. Dated 1969.

Incorporated in Colorado (1966) , the regional company ceased operations in 1984. This Denver based airline went out of business in the 1970's but remained a corporate entity. Trans Central Airlines had been reformed from Air Central of Enid, Oklahoma which they purchased in December, 1979. They flew Swearinger Metros, Piper Navajo and Nihon YS-11 aircraft. Their main routes were between Oklahoma City and Little Rock, AR, Topeka, KS, Dallas/Ft. Worth, TX and Memphis, TN. The airline ceased operations on September 11, 1984 before being purchased by Air Midwest.