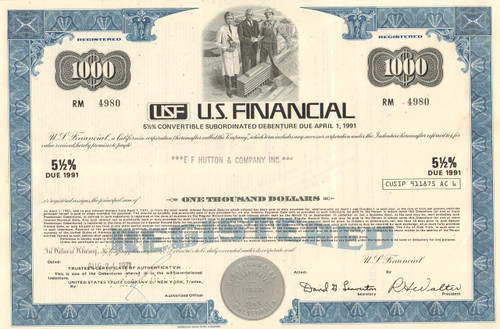 This collectible bond certificate has a great vignette of giant figures representing science, business, and construction (parts of the UF portfolio) standing over the company headquarters.  Issued and cancelled, dated 1971.  Colors and denominations as shown.

Incorporated in 1962, USF was a builder of homes. From its 1971 prospectus, the corporation noted: "USF conducts a significant portion of its single-family home production as a participant in joint ventures. Typically, USF's joint venturer is an independent general contractor and developer who is familiar with local industry conditions and regulations. Such joint venturer contributes half the equity capital (which may be borrowed from USF, if secured by the pledge of collateral), his skill as general contractor and administrator of the project, and, in some instances, the land to be developed. USF typically invests the remainder of the equity capital and provides interim financing and related services. USF controls the design of construction, the rate of development, cash disbursements and accounting, and preforms a wide variety of other related services. At December 31 1970, USF was a participant in 67 joint ventures."

With some joint venture accounting tricks of the time, USF was able to – rather than use consolidation principles – account for any profits using joint venture accounting rules, but at the same time put the risk of any failed developments back onto the joint venturer and not USF itself. A failed development could therefore avoid disclosure to shareholders in other words. All done, often legally, to overstate income, inflate the earnings per share and hence underwrite the stock price. The tricks were uncovered towards the end of 1973. Bankruptcy was declared in 1974.