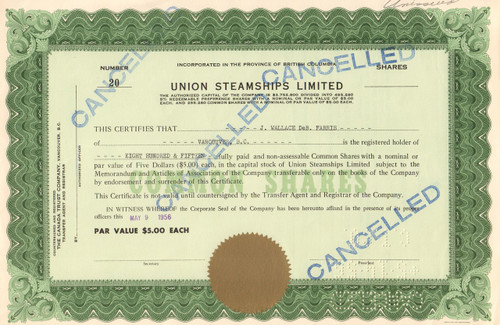 The Union Steamship Company of British Columbia was a pioneer firm on coastal British Columbia. It started in November 1889 by John Darling, a director of the Union Steamship Company of New Zealand, and nine local businessmen. It started with the local service on Burrard Inlet near Vancouver, and expanded to the entire British Columbia coast. Initially a cross harbour service with the steamers Senator and Lonsdale, the line was asked to take on more roles, calling in at Howe Sound, Gibsons Landing, and various logging camps and sawmills. The demand outstripped the availability of vessels.

There was an initial capital base of £40,000 allowed for the purchase of three tugboats and seven barges, the foundation of the Union Company fleet. Between 1891 and 1911, the Company went on to build ten additional vessels, all but two from shipyards in Scotland and Ireland. In 1891 three Scottish made ships were assembled in Coal Harbour—the Capilano, Coquitlam, and Cowichan—and these hulls started the modern company. The fleet expanded over the years with C named steamers: the Cassiar, Chehalis, Cardero, and Cheslakee. Later the company built a Lady series, Lady Alexandra, Lady Celia for example. The company was a lifeline for loggers, settlers and fish camps in a land without roads or cars. Boat day was a big event for many community as the steamer would bring in families, food and mail.

Between 1891 and 1911, the Company went on to build ten additional vessels, all but two from shipyards in Scotland and Ireland. During this period and beyond, the Company barely survived a number of misfortunes and ill-fated ventures, to eventually emerge as the principal steamship link to the growing resource industries of the central and north coast of the province.

While the period from 1911 to 1920 was for the Company a time of consolidation of its routes and services after a decade of expansion, marine trade was slowed by the outbreak of war in 1914. Economic recovery did not begin until the United States entered the war in 1917, giving a much-needed boost to the coastal lumber industry. But by the fall of 1922, the booming coastal salmon industry’s increasing need for dependable marine transport for its product had convinced the Union Company that an additional ship was required for the northern cannery run. Accordingly, the Scots firm of Napier and Miller at Old Kilpatrick on the River Clyde were engaged to build a large, modern vessel capable of meeting this burgeoning demand.

The Union Steamship Company was bought out by the Canadian Pacific Steamships in 1948 in a marriage at the Senior Home. The SS Noronic fire in Toronto forced the Federal Maritime Department to change marine regulations regarding wooden passenger vessels, while the nature of the BC coastal fleet changed more to freight and a tug and barge operation. The Union Steamships ran until 1956 when a strike finished the fleet.

The assets of the Company were taken over by Northland Navigation in 1962.