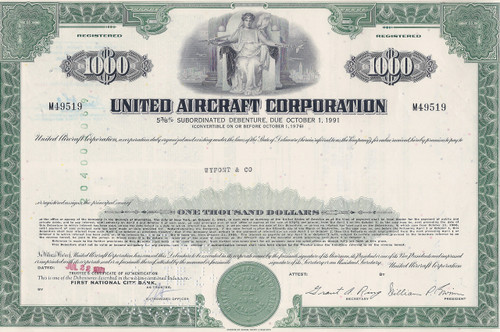 Great vignette of a seated Greek female figure (goddess Athena?) holding an aircraft in one hand and a caduceus in the other; planes fly in the background.  Green bonds are $1000 denomination while red certs are vraious denominations, usually $100.  Dated 1976.

The Air Mail scandal of the early 1930s resulted in a rebuilt air mail system, under the Air Mail Act of 1934, in which carriers and their equipment manufacturers could no longer be owned by the same company. The United Aircraft and Transport Corporation was broken up as a result of this new law. The corporation's airline interests went on to become United Airlines. Its manufacturing interests east of the Mississippi River--Pratt & Whitney, Chance Vought, and Sikorsky—remained together as the new United Aircraft Corporation, headquartered in Hartford with Frederick Rentschler, founder of Pratt & Whitney, as president. All manufacturing interests west of the Mississippi became part of a revived Boeing Aircraft.

The latter half of the 1930s saw military procurement buildups around the world as governments foresaw possible war on the horizon. United Aircraft sold to both the United States Army and the United States Navy, but the Navy's requirements for carrier-based aircraft, with maximized power-to-weight ratios for minimized takeoff runway length, were always more in tune with the specialties of United's subsidiaries.

For the subsidiaries of United Aircraft, and for countless other manufacturing firms, World War II was an exercise in how to attempt to meet limitless demand for production. The U.S. government encouraged corporations to build up their physical plant, but the corporations knew that there would be a postwar glut of overcapacity if they did so. In many cases a compromise was reached in which the government paid partially or fully for the expansions in the form of tax breaks and accelerated depreciation.

United Aircraft ranked sixth among United States corporations in the value of wartime production contracts. At the close of the war, jet engines and helicopters were both big new things whose coming growth many companies hoped to get in on. United Aircraft entered both industries, via Pratt & Whitney and Sikorsky, respectively.

Pratt & Whitney feared the head start that Rolls Royce and General Electric would have in jets, based on their jet programs during the war and the late 1940s. But its jet team, led by Leonard S. Hobbs, successfully developed the Pratt & Whitney J57, which, being the most powerful jet engine on the market for some years, brought Pratt & Whitney profitability in the jet field.

The 1960s brought new challenges, from more complex technology and bigger, more expensive aircraft to more mature markets with stiffer competition from GE, Rolls Royce, and SNECMA.[1] The competitions for the aircraft that would become the Lockheed C-5 Galaxy and the Boeing 747 were some of the financially riskier episodes. Pratt & Whitney ended up building the engines for the 747, producing the Pratt & Whitney JT9D, but the program was rocky. For several years Boeing and Pratt & Whitney struggled with an aircraft that was too heavy and underpowered. Eventually, after a lot of continued development work, the 747 redeemed itself.  On the military side of the business, the TFX joint-procurement program led to the General Dynamics F-111 Aardvark powered by the Pratt & Whitney TF30.

In the 1970s the jet engine manufacturers found that their products for the commercial market had been commoditized to a greater extent than in previous decades. Leaving behind a tradition of mating airframes to particular engines, the airframe builders began offering multiple brands of engines.

In 1974, Harry Gray left Litton Industries to become the CEO of United Aircraft. He pursued a strategy of growth and diversification, changing the parent corporation's name to United Technologies Corporation (UTC) in 1975 to reflect the intent to diversify into numerous high tech fields beyond aerospace.