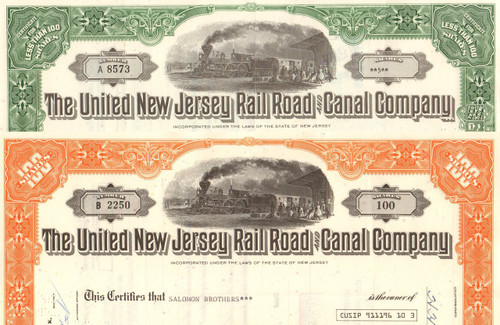 Wonderful vignette of an old steam locomotive pulling out of a train station.  Incorporated in New Jersey. Dated in the 1970's. This listing is for the set of 2 colors. Check out the railroad catagory to buy single pieces.

The Camden and Amboy Rail Road and Transportation Company (C&A) was chartered on February 4, 1830, on the same day as the Delaware and Raritan Canal Company, after the two competing companies had come to a compromise.

Robert L. Stevens was president of the C&A in the 1830s and 1840s. The C&A was organized on April 28, 1830, and surveys began June 16. As railroads were a relatively new invention, rails and locomotives were bought from England. The first section, from Stewarts Point Wharf near Bordentown north to Hightstown, was opened to the public on October 1, 1832, being operated by horse at first. Within two months a derailment killed two people; the earliest recorded train accident involving the death of passengers

On March 7, 1832 the New Jersey Rail Road and Transportation Company (NJRR) was chartered as a parallel line to the C&A, beginning at Jersey City, closer to New York City. In November 1832 the NJRR acquired control of the Newark Turnpike, which paralleled the planned alignment east of Newark, to avoid problems caused by competition.  Regular NJRR service began September 15, 1834 between Newark and Jersey City, using a temporary track over Bergen Hill.

By 1841, a connection opened between the Philadelphia & Trenton Railroad and the C&A's Trenton Branch, including a bridge over the Delaware and Raritan (D&R) Canal in Trenton; this allowed for through Philadelphia-Jersey City operation, but most traffic continued to run via Camden due to the distance between the P&T's Kensington terminal and Philadelphia.

Closely tied to the early NJRR was the Paterson and Hudson River Railroad, later the main line of the Erie Railroad. Also involved with the NJRR was the Morris and Essex Railroad, later the Delaware, Lackawanna and Western Railroad's main line. On October 21, 1836 the NJRR agreed to carry M&E traffic between Newark and Jersey City, beginning November 19. The Central Railroad of New Jersey also used the NJRR to reach Jersey City from Elizabeth until its own line opened on August 1, 1864.

In 1968 the PRR merged with the New York Central Railroad, to form the Penn Central. A series of events including inflation, poor management, abnormally harsh weather conditions and the withdrawal of a government-guaranteed 200-million-dollar operating loan forced the Penn Central to file for bankruptcy protection in 1970. PRR operated under court supervision until 1976, when the Northeast Corridor rail line was transferred to Amtrak for use in passenger service, and the remaining lines were transferred to Conrail. Initially Conrail operated commuter rail service on its lines under contract to the New Jersey Department of Transportation. In 1979, the commuter lines were acquired by New Jersey Transit.