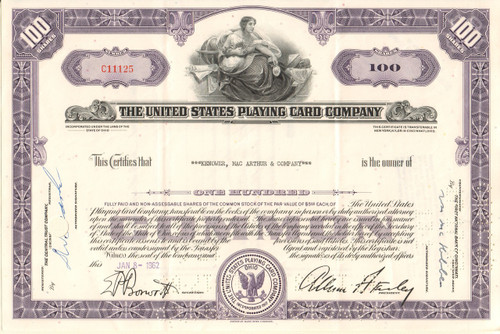 The United States Playing Card Company (USPCC), established in 1867 as Russell, Morgan & Co. and founded in its current incarnation in 1885, is a large producer and distributor of playing cards. Its many brands include Bicycle, Bee, Tally-Ho, Congress, Hoyle, Aviator, KEM, and several others. It also produces novelty and custom cards, and other playing card accessories such as poker chips. The company was once based in Cincinnati, Ohio, but is now headquartered in the Cincinnati suburb of Erlanger, Kentucky. It is currently a subsidiary of Newell Brands.

The company began printing four brands of playing cards in 1881: Tigers (No. 101), Sportsman's (No. 202), Army and Navy (both No. 303, No. 505 with Gold Edges), and Congress (No. 404, No. 606 with gold edges). They began printing Bicycle cards, which would become their most popular line, in 1885. Business boomed and in 1891 Russel, Morgan, & Co. changed its name to the United States Printing Company. The playing card business was successful enough that it was spun off as a separate business in 1894, as The United States Playing Card Company.

Meanwhile, the company would itself be acquired several times in its history: starting with Diamond International in 1969, Jessup & Lamont in 1982, Frontenac in 1989, and then a return to self-ownership in 1994 before finally becoming a subsidiary of Jarden which was in turn acquired by Newell.

The USPCC has historically supported wartime soldiers, starting with the inexpensive Canteen brand of cards during the Spanish–American War and the Pickett brand during World War I. During World War II, USPCC manufactured spotter cards so soldiers can identify enemy units and cooperated with the U.S. Government in creating clandestine decks given to POWs; these cards could be moistened and peeled apart to reveal escape maps.