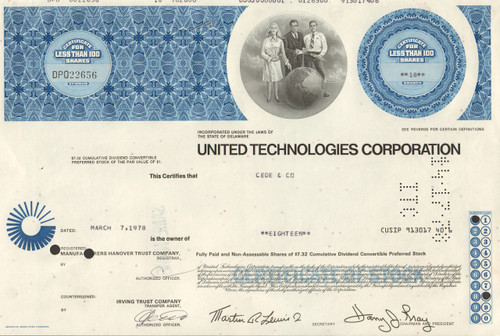 In 1974, Harry Gray left Litton Industries to become the CEO of United Aircraft. He pursued a strategy of growth and diversification, changing the parent corporation's name to United Technologies Corporation (UTC) in 1975 to reflect the intent to diversify into numerous high tech fields beyond aerospace.  UTC became a mergers and acquisitions focused organization. The next year, UTC acquired Otis Elevator. In 1979, Carrier Refrigeration and Mostek were acquired; the Carrier deal was forcible, while the Mostek deal was a white knight move against hostile takeover by Gould.

At one point the military portion of UTC's business, whose sensitivity to "excess profits" and boom/bust demand drove UTC to diversify away from it, actually carried the weight of losses incurred by the commercial M&A side of the business. Although M&A activity was not new to United Aircraft, the M&A activity of the 1970s and 1980s was higher-stakes and arguably unfocused.  Mostek was sold in 1985 to the French electronics company Thomson.

UTC acquired Sundstrand Corporation in 1999, and merged it into UTC's Hamilton Standard unit to form Hamilton Sundstrand. In 2003, UTC entered the fire and security business by purchasing Chubb Security. In 2004, UTC acquired the Schweizer Aircraft Corporation which planned to operate as a wholly owned subsidiary under their Sikorsky Aircraft division.  In 2005, UTC further pursued its stake in the fire and security business by purchasing Kidde. Also in 2005, UTC acquired Boeing's Rocketdyne division, which was merged into the Pratt & Whitney business unit.

In March 2008, UTC made a $2.63 billion bid to acquire Diebold, a Canton, Ohio based manufacturer of banking and voting machines. Diebold rejected the buyout bid as inadequate. In November 2008, UTC's Carrier Corporation acquired NORESCO, one of the nation's largest energy service companies. In 2009, it was announced that UTC would acquire a 49.5% stake in Clipper Windpower for $206 million.

In September 2011, UTC acquired a $18.4 billion deal for aircraft components maker Goodrich Corporation. In June 2012, it was discovered that UTC sold military technology to the Chinese. For pleading guilty to violating the Arms Export Control Act and making false statements, United Technologies and its subsidiaries were fined $75 million. In July 2012, United Technologies acquired Goodrich and merged it with Hamilton Sundstrand; the resulting organization is UTC Aerospace Systems.