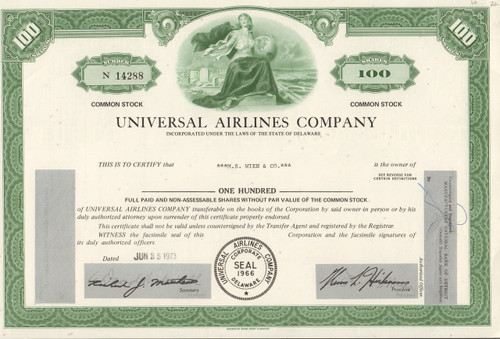 Universal Airlines was a United States airline that operated from 1966 to 1972, based at Willow Run Airport in Ypsilanti, Michigan. It initially grew out of Zantop Air Transport, starting with a small fleet of C-46, DC-6, DC-7, and Argosy AW650 aircraft. Over time Lockheed Electras were added to the fleet. In 1969 Universal took delivery of DC-8 aircraft both standard and stretched versions, and leased three additional DC-8s over the next three years.

It operated a number of military contract flights. During its heyday in 1969, Universal Airlines looked into the plausibility of obtaining the Lockheed L-500 (Civilian C-5) to carry passengers and their vehicles from coast to coast. An actual display model of that concept was displayed in the hangar two lobby. The airline went bankrupt in May 1972 and its assets were received by Saturn Airways.

In December 1967 and January 1968, respectively, Saturn took delivery of two Douglas DC-8 Super 61CF jets. This allowed it to operate transcontinental cargo and charter flights, some of which included military flights to Vietnam. Between 1968 and 1974 it had two DC-8 Series 50 planes in its inventory and added a third Super 61CF in 1972. After absorbing the assets of defunct Universal Airlines in May 1972, it added nine Lockheed L-188 Electra aircraft to its fleet. Saturn also operated nineteen Lockheed Hercules aircraft.

Saturn was finally absorbed by Trans International Airlines in December 1976, making Trans International the largest air cargo operation at the time.  The Triple Crown winning racehorse, Secretariat, was flown to Ontario, Canada on a Saturn Airways charter to run in his last race.