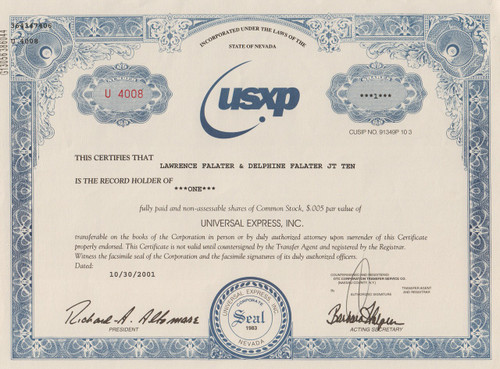 Uncommon modern cert. This stock has the USXP logo as the vignette. Issued and not cancelled. Dated 2001.

Universal Express claimed to be a transportation and logistics service company and was registered in Nevada and headquartered in Boca Raton, Florida. However, investigation by the SEC clearly revealed that the primary business of USXP was the production of and distribution of billions of illegal, unregistered shares. The money from these sales went directly to support the lavish lifestyle of Richard Altomare and his supporters. Some funds were diverted to advertising designed to push the sale of additional shares.

CEO Richard A. Altomare took control of the defunct Packaging Plus Services in 1988, and immediately began issuing billions of illegal and unregistered shares of stock, before the company collapsed in 2007. In later years, the company became known for accusations of naked short selling and questionable S.E.C. filings.  A receiver was appointed for Universal Express by a federal judge at the request of the S.E.C. The judge ordered Universal and its top officers to pay $21.9 million and barred them from future penny stock sales.

Altomare was ordered to prison for contempt of court in April 2008. In May, 2008, he was incarcerated in the Metropolitan Correctional Center, New York City. Altomare has been barred from being an executive of any public company. A federal court judge, in finding that the company and its top officers had violated securities laws, called Altomare, and Universal Express' general counsel, Chris Gunderson, "repeated and remorseless violators" of the securities laws.